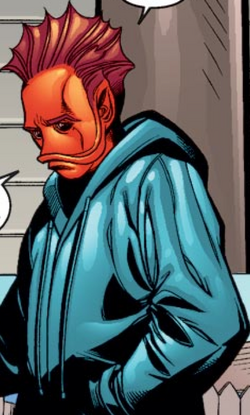 Squid-Boy's history is identical to that of his Earth-616 counterpart up until being murdered by Black Tom Cassidy. Juggernaut learned that Carter Ghazikhanian was taught by the Phoenix how to resurrect others. He hoped to use this ability to resurrect Sam.

After she resurrected him, he liked Juggernaut, but had no connection to him, as he was only the same body, not the same soul. After seeing how Juggernaut cared for him and was willing to defend him even against the likes of Phoenix, he began to warm up to him. He asks Juggernaut to take him under his wing, and he happily accepts.

Sammy can breathe and talk underwater due to his mutation.

Retrieved from "https://marvelcomicsfanon.fandom.com/wiki/Samuel_Par%C3%A9_(Earth-858)?oldid=255320"
Community content is available under CC-BY-SA unless otherwise noted.