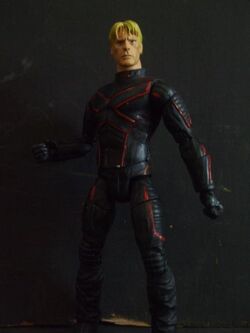 Dating
Origin
Origin
Airborne mutant who joined the X-Men to be a hero.
Creators

It's not hard to make a difference for a small Kentucky town. But you can't do it for the world, I learned that the hard way. But you seem to think the X-Men can save the world. And Sam Guthrie, human cannonball, is on your side.

Samuel Guthrie was born into a large family. He had at least 5 siblings, and every single one spent their time working the farm. Samuel always wanted a greater purpose, as much as he loved the farm. Soon he manifested mutant abilities, including flight and limited invulnerability. He would do his farm-work a lot quicker, in order to spend his time flying around the Kentucky countryside. He became a part-time guitar player in Nashville as well. He eventually came out to his family in regards to his powers, and he was still welcomed among his family. He began using his powers to help with farm-work.

He was soon approached by Charles Xavier. He had heard that Sam was in fact a mutant. He revealed that he too was a mutant, but he was a telepath. He said that he had never seen mutant powers quite like Sam's, and he was considerably impressed. He informed Sam that his first group of mutants went missing on a mission. He requested Sam's help in getting them back, and with permission from his family, he left. His invulnerability while flying were an asset on Krakoa, and he was able to help save them. Krakoa opened Sam's eyes, and he was happy to finally see the world through the eyes and ears of the X-Men. And after forming a relationship with fellow teammate Skids, he never felt better.

Thermo-Nuclear Thrust: Cannonball possesses the ability to generate thermo-nuclear thrust and release it from his body. He can cause his body to be propelled through the air to fly, with amazing speed, height, and agility.

Blast Field: This energy also manifests itself as an impenetrable, indestructible field he named his “blast field”. He can use this blast-field to function as a force field, extend it to encompass others, imprison them, or absorb outside impact and then re-channel it to increase the power of his blows or create explosive shock waves upon impact.

Superhuman Durability: He possesses superhuman durability due to the energy field that forms around his body.

Possible Immortality: Cannonball has been theorized to be immortal, as he has survived situations in which other mutants died, the truth of this is unsure.

Retrieved from "https://marvelcomicsfanon.fandom.com/wiki/Samuel_Guthrie_(Earth-5)?oldid=59675"
Community content is available under CC-BY-SA unless otherwise noted.