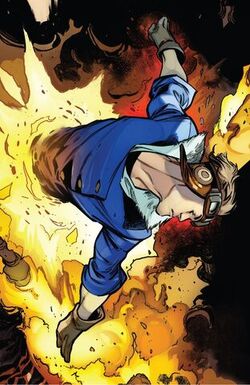 I don't know much about much, but I do know the difference between right and wrong.

Sam Guthrie developed his mutant abilities mere days before the Sentinel onslaught began. A cadre of Sentinels arrived on his family farm and slaughtered his loved ones. He was barely able to escape using his powers, and found himself on the run for months. He became even more disconcerted when the ancient mutant Apocalypse rose up and began amassing an army of mutants to oppose the Sentinels, who had evolved beyond their programming by humans.

Sam wanted to do what he could to help and avenge the memory of his family, but he felt like he had no place in the war. That is, until Captain America returned for the first time since World War 2, calling for heroes from all over the world to assemble and fight for what's right.

Sam became inspired by his message, and was one of dozens of heroes to amass together in the human stronghold of Eastern Europe. Captain America was there, and he welcomed every one of them into the resistance, earning themselves the name of the Avengers. Sam was given the codename of Cannonball, and became close friends with his fellow new Avengers Spider-Man, Colossus, Black Widow, and Gambit. The five of them ended up going on countless missions together, tearing down Sentinel bases and trying to convert Apocalypse's followers to the side of the righteous.

However, they eventually found themselves on a mission in the Master Mold stronghold, where the Sentinels were attempting to convert the Horseman of War into a Sentinel. They managed to tear down the base, but not before the Sentinels were able to kill each and every one of them. Eventually, Cannonball was the only survivor, but during his attempted escape, he was vaporized by a Sentinel photon blast.

But rather than being atomized, Cannonball was plucked from reality by the Silver Sentry, who paired him up with a man named Caleb Avery. The two of them were placed on Team X, whose mission was to travel the multiverse and repair cracks in reality. Cannonball was hesitant to trust the team leader, Angel, due to his counterpart being the Horseman of Death.

But eventually Angel met his end on one of Cannonball's first missions, which shook his beliefs. From then on, he decided that no matter what surprises the multiverse held, he would trust his teammates like he did in his reality, hopefully to avoid dying another horrible death.

Unfortunately, Team X eventually found themselves trapped in a reality where that version of Doctor Strange had used the forces of the Dark Dimension to rule over the Earth. Team X spent months fighting against him, and eventually made their final stand inside the Sanctum Sanctorum, where Doctor Strange and Dormammu were unleashing their full power against each other. Eventually, a portal to the Dark Dimension began turning reality inside out, and the only way to complete their mission was banish Doctor Strange through the portal. After Toad was burned alive by Dormammu, Cannonball realized that there was no way to win without making a sacrifice. He thrusted himself forward, tackling Doctor Strange and forcing him through the portal. However, in the process his physical form was completely destroyed.

Super Strength While in Flight Mode

Retrieved from "https://marvelcomicsfanon.fandom.com/wiki/Samuel_Guthrie_(Earth-11663)?oldid=253309"
Community content is available under CC-BY-SA unless otherwise noted.