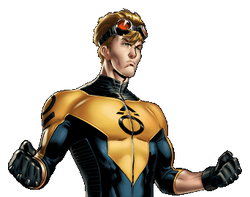 Blue, with a greyish tint
Hair

Samuel Zachery Guthrie was the eldest son of a large farming Kentucky family. Sam attempted to help out his family by working in a coal mine after his father had died there inhaling coal dust. Right on his first day, Sam and his father's friend, Lewis, were trapped in a cave-in. In his panic, Sam manifested his mutant blasting powers which allowed him and Lewis to escape the collapse.

While studying at college and working at Graymalkin Industries he was approached by Daimon Hellstrom, who invited him to join the Hellfire Club in New York. The young man agreed, led by his impulses.

After finding out about the Inner Circle's true goals, he left the club and found himself in Utopia Island, where some Utopia Division members told him he should visit Professor X. The X-Men leader offered him a spot in the team, which he accepted.

Cannonball is a mutant.

Thermo-Chemical Energy Field Propulsion: Cannonball possesses the ability to bodily generate thermo-chemical energy and release it from his skin. This energy is used as thrust to cause his body to be propelled through the air, like his namesake, at great heights and speeds with considerable maneuverability. He can control his speed and direction through sheer act of will. At first he could only release this energy from his feet, but now he can fire it from almost any part of his body, to a wide variety of effects.

It has been theorized that Cannonball may be one of the Externals, and therefore immortal (although evidence for this is somewhat questionable).

Cannonball possesses the normal human strength of a young man of his age, height, and build who engages in moderate regular exercise. However, when he uses his powers to apply thrust beneath him, the force thus generated enables him to bear aloft over a ton of weight in addition to his own.

Retrieved from "https://marvelcomicsfanon.fandom.com/wiki/Samuel_Guthrie_(Earth-1010)?oldid=115465"
Community content is available under CC-BY-SA unless otherwise noted.