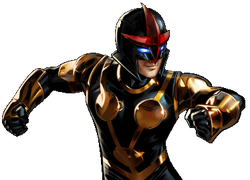 Sam Alexander, alias Nova's received his powers from the Nova Force, which gave him the ability to channel through his helmet. These powers include flight, enhanced durability, and the ability to absorb and release pulses of energy. However, Sam does not know the extent of his powers, let alone how they work. He goes to Midtown High School along with White Tiger (Ava Ayala), Iron Fist (Danny Rand), Luke Cage and Spider-Man (Peter Parker).

Sam can speak some Spanish due to his mother using the language frequently. He has also started to teach himself Morse Code, though his understanding of it is still imperfect.

Retrieved from "https://marvelcomicsfanon.fandom.com/wiki/Samuel_Alexander_(Earth-1010)?oldid=130275"
Community content is available under CC-BY-SA unless otherwise noted.