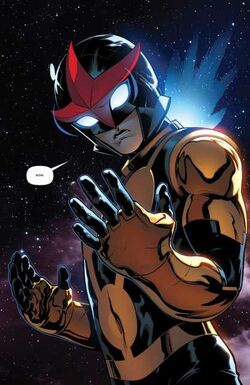 You wanna know who I am? You sure you wanna know? If someone told you I was just some ordinary, happy go lucky kid... you need to tell me who that was so I can kick their ass. Do you know what I did last week? I fought Thanos, made out with a Skrull Priestess, and I rode a freaking Bilgesnipe! My life is awesome!

Sam Alexander was living a normal life in Arizona when one day he discovered his father's old Nova helmet hidden away in the attic. When he asked his father about it, he denied everything and claimed it was simply an old Halloween costume.

Not believing him, Sam began doing research into the old hero Nova, discovering that Richard Rider was once a member of the inter-galactic police force the Nova Corps. Curious about why his father's helmet looked slightly different, he tried it one and was instantly imbued with the power of Nova.

The reemergence of the Black Nova Helmet attracted the attention of the Nova Prime on Xandar, who sent a squad to apprehend Sam and bring him back for trial. After it was discovered that he was Jesse Alexander's son, Nova Prime told him about his father's selfless heroics, and offered Sam the chance to live up to it.

Sam was hesitant, but after Xandar was attacked by a Badoon war fleet, he threw himself into battle and felt a thrill by doing the right thing. He then began traveling between Earth and space as the new Nova. This attracted the attention of the Avengers and S.W.O.R.D., who wanted to make sure he was on their side. He later even found himself crossing paths with the Guardians of the Galaxy, who most of the Nova Corps held disdain for. Sam, however, enjoyed their reckless attitudes and way of life and began splitting his time as a member of their team.

Retrieved from "https://marvelcomicsfanon.fandom.com/wiki/Samuel_Alexander_(Earth-101)?oldid=249066"
Community content is available under CC-BY-SA unless otherwise noted.