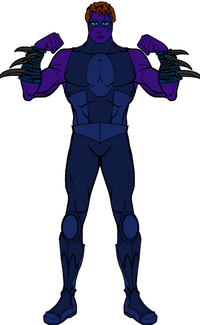 Like all in my family before me I want to be a hero. What I want is to show the world again the Hulk family can do good and aren't just monsters. He also can alter his biological state such as manifesting wings, claws, and changing parts of his body into weapons.

Samson is the son of the Red She-hulk, also known as Betty Ross and unknowingly to him at a skrull agent. A result of this Skrull seducing Betty Samson would eventually come to be. But Betty died during giving birth to Samson and faced complications in her regular form, resulting in her death. As a result he was eventually taken in by the SHIELD since his father was no where to be found, for a while never being aware it was this mysterious Skrull agent.

Though it was through some genetic testing that SHIELD discovered that not only did Samson hold potential to become another Hulk but he also showed an alien origin. But due to the lack of Skrull DNA being available they never were aware of what alien lineage he held. Nevertheless, Samson was raised from a young age to become another SHIELD agent for the organization. Many Junior Agents weren't made aware of his origin and it seemed for a while he fit in just fine. He never met Sam Wilson Junior, Kaitlyn, or Lucas but he did hear of their reputation making him curious about them.

But it became clear from a young age that Samson was not a typical kid. By the time he was about nine he began to show signs of having purple skin, followed by just before he was to turn ten he got in an argument with another junior agent something else happened. When he became angered with the agent, Samson became larger in mass and for a moment uncontrollable as he attacked the kid and a few others. It was this moment that Samson displayed his Hulk-like abilities and he was pulled from the group training and put into a more private tutoring of his abilities. During the two years to follow, it wasn't long before Samson revealed his shapeshifting abilities, causing many to realize just what alien race his alien half came from at last.

But, that didn't change their perspective of the boy's potential as he continued his training, which also extending to training as a covert spy. Due to his shapeshifting abilities it proved useful as an asset to the organization to make use of in gathering intel and certain items.

Soon though, Maria became interested in the suggestion of the veteran heroes about reopening Avengers Academy. But without waiting entirely for approval on the matter, the academy was already being refurnished, remodeled, and reopened before Maria could have much say. Despite her annoyance Maria quickly put an investment into the academy, not only viewing it as a way to train future agents but also to keep an eye on those that enrolled.

As a secondary set of eyes, Samson was enrolled into the academy and came to quickly fit in with the other Young Avengers despite his parentage.

Samson has twice the strength of a man his age and height. When angered this increases along with his muscle mass.

Retrieved from "https://marvelcomicsfanon.fandom.com/wiki/Samson_Ross_(Earth-7194)?oldid=161814"
Community content is available under CC-BY-SA unless otherwise noted.