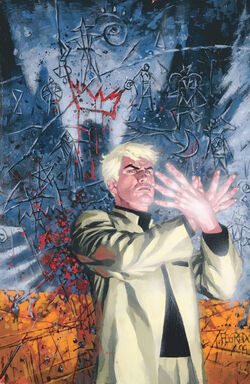 Marvelous Multiverse
Base Of Operations
Mobile across California, England, and various other locations on Earth; former resident in the Paradise, Heaven
Characteristics
Gender

Well... I was too good for heaven... And hell... Hell is just the bloody worst... Luci was strangely perfect for that shitehole, which makes sense... Then I thought, "Earth for me, it is!"

Samael Morningstar, was another infamous angelic figure commonly found and foretold in Judeo-Christian and other Abrahamic theologies. Samael was originally a resident of the pocket realm commonly referred to as Heaven and was one of the fifteen greatest Archangels residing there, though he never cared about his rankings or his life as a commander for the angels, as he only truly cared about living life in Paradise as a resident, and not just some shepherd-like soldier who has to keep burdening himself leading other angels as it was and has always been instructed to him and the other archangels by Father God, the Unified Cosmos. At birth, Samael had an hours older twin brother named Lucifer. Together, the two brothers grew up alike and were eventually known as the Mischievous Morningstars, in which Samael was somewhat proud of but Lucifer on the other hand, not so much, with the latter realizing how much Samael has often stole his thunder and taken his spotlight due to Samael's natural charm, rendering the two to constantly outwit and challenge each other on who was the better Morningstar. Despite being the "lesser evil" compared to Lucifer, Samael's charismatic and unruly impressions eventually rendered most of the Angels to translate his name such as "Venom of God," "Poison of God," or "Blindness of God." At one point later on, he was part of the army of angels led by Lucifer to banish the demonic cosmos entity, an Elder God named N'Garai from the benevolent pocket realm of Heaven approximately one million years prior to his rebellion and fall against the Unified Cosmos, God personified.

At some point afterwards, Lucifer finally decided to lead a rebellion of up to one-third of the angelic host whom he deceived in an attempt to take over the kingdom of heaven from Yahweh, God of the entire creation. Hearing his twin's plan of mutiny, Samael scoffed in disappointment, seeing how impractical and ambitious Lucifer just to prove his delusion, which also worries Samael, showing that he still has some concerns for the very brother who hates him with a fiery passion. In response, though Lucifer grew tired of his younger twin's bickering in which he tried to incapacitate him. Banished out of Heaven, found himself waking up in the surface of a very particular pocket nether dimension somewhere at the edge of the multiverse called and described as Hell. As Samael had feared the worst would happen, the very revolt Lucifer had initiated had failed in the process of almost winning against most of God's defenders of Heaven, the loyal archangels. In his defeat which Samael himself already expected, Lucifer would later bitterly accuse God of loving his human creations throughout the universe even, especially on planet Earth, more than the angels that lie in the heart of Heaven, even before reality itself was unintentionally conceived into existence during the rebellion of the Beyonders against the godly Celestials, that would end in the subsequent creation of the prime and central reality of the multiverse known as the Modern Universe.

As an extreme punishment for his attempted takeover on Heaven, Lucifer, his lieutenants and others were all also cast down into Hell wherein they eventually became degenerate-looking demons as a result of cosmic mutation, in which Lucifer met with Samael not long afterwards, much to Samael's dissatisfaction, since he initially thought that Hell was all for himself to rule over. In Hell, Samael and the rest of the angels looked nothing like the high and beautiful form of angel he once was. He and all of his loyal lieutenants have degenerated into demons, some through instruction, others adapted more naturally. But they all had over time, changed into twisted creatures of evil which Samael did exceedingly well without much inconvenience.

While Lucifer rose to claim dominion over hell in the shadows as the Devil or Satan among many other names its worshipers and opposers alike have called him throughout millennial of human civilization, Samael instead became the black sheep of his newfound "society" of demons and other countless other deteriorating creatures that spawned there, spending his new life as some kind of understudy, stunt double, or in simple words a substitute for Lucifer's position as the ruler of Hell whenever the latter is not around. Samael initially felt stoic with the change of what his people now perceived as part of "God's Grand Plan," as Demons of Hell, though Samael himself knew something about the Great Plan itself, is that there is no such thing as a "plan," other than let the flow of universal impermanence determine whatever their fates are and would end up to be.

In layman's term, Samael could pretty much do whatever the hell he wants, and it doesn't have to do anything with Hell itself, since only Samael and Lucifer was aware that they were in Hell because they were given punishment, not paradise which they were banished from for their treachery. After several thousands to millions of years which reached into the modern day era, he realized that the philosophy of impermanence was right, deciding that he no longer wanted to do what he believed was expected of him and so he abandoned Hell and change his course to the newly-formed universe, planning to start over a new life to live, thrive, and cherish his days among his father's other sentient children of creation: humanity, never looking back from his ironically tragic angelic past. Leaving the Hell dimension through mystical means, Samael had to endure travelling countless of worlds, realms, and other dimensions and dealing with other beings across the multiverse, before he could've reached the planet of humans by the early 1950s on planet Earth.

Since setting foot on Earth, Samael has lived different lives in every decade under various aliases using what was left of his powers as both an archangel and a demon in order to make his lives interesting. In the 1980s, Samael was Jerry Callaghan, a self-proclaimed occult detective and professional sorcerer from London, England since Samael confidently believed it would serve as a bridge from a Hellish to an Earthly livelihood and a step-up point into getting used as a fallen angel as he lives among humans. Unfortunate for Jerry, he only got a few cases of confronting, though mostly consulting and escorting lost spirits among the recently deceased to the afterlife, and none of them were fulfilling his satisfactions given the realization that he basically ended up a shaman in his first life. By the 1990s, Samael temporarily abandoned his career as Callaghan and his previous lives the past decades, moving on to his new identity somewhere in the United States, specifically in California.

There, Samael initially continued his dead-end career, but after days of drinking at bars and partying at clubs, he realized that would prefer living a more careless lifestyle than someone who lives by working and serving others instead of finding another purpose, annoyingly reminding him of his archangel years, as if it's his primitive instincts to serve. Still, Samael began to doubt his feeling and starts to find ways to forget his previous life, starting with immersing himself to drinking alcohol and sleeping around non-stop. Using both his angelic and demonic powers to amplify his too human-ish and mundane lifestyle into a wilder and more adventurous one. In the process, Samael still continued his life as the occult sorcerer Jerry Callaghan especially after he came across the Runaways by the 2000s in Los Angeles, in which he and other mystical heroes willingly helped in dealing with and defeating the satanic-like cult organization known as Pride, who Samael found out was secretly formed by the Hell Lords, a league of archdemons which coincidentally includes his more sinister and more culturally recognized twin, Lucifer, as one of its founders. Samael decided not to find Lucifer, go back "home," or interfere with any of his diabolical affairs (unless it threatens the world), leaving a form of closure knowing that his brother is doing fine, if not fantastic without him, and vice versa while Samael lives in Earth. As Samael finishes his momentary case with the Runaways, the superheroes' way of living gave him a ludicrous yet somewhat efficient idea to live two lives at once, with one with being his occult detective life and his brand new comfortable civilian identity as Samuel "Sam" Morningstar.

Angelic Physiology: Unlike regular Fallen Angels and similar to his twin brother Lucifer, the Archangel Samael luckily retained most of his holy and nigh omnipotent powers, instead of them being faded away completely. Samael is able to manipulate any external force for any effect he desires, albeit with limitations which he shouldn't try to surpass, otherwise it would strain himself every time he tapped into his lost powers.

Retrieved from "https://marvelcomicsfanon.fandom.com/wiki/Samael_Morningstar_(Earth-61615)?oldid=266499"
Community content is available under CC-BY-SA unless otherwise noted.