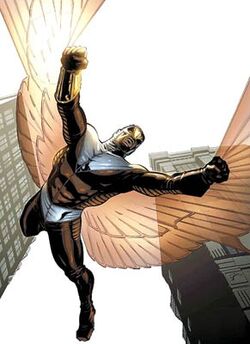 Sam Wilson was born to Paul and Darlene Wilson. As a child Sam took a interest in birds. Sam's Grandfather Fredrick used to take him to the bird house where Sam would draw the birds he saw.

When Sam was in High School he realised that his dream was to fly and to draw and he dropped out. Sam became a Freelance Artist and painted for money as his parents didn't forgive him for dropping out. Sam then saw a innocent man getting beaten up and acted quickly, Sam saved the man who told him his name was Blake Delmar. Sam took Delmar to the local hospital after Delmar told him that he worked for the Strategic Homeland Intervention, Enforcement and Logistics Division and that they could use someone like him.

Sam Wilson now a member of S.H.I.E.L.D, was called to Nick Fury's office where he told him that he would go under a operation called Project: Wingspan. Sam was then taken to a operation room where they cut his back open and placed in a collapsable Wing in both sides. When Sam awoke he used his mind to open up the wings and he took the name Falcon.

Sam now Falcon was assigned on a mission to Russia where he would be with Captain America and Black Widow. The Captain and Sam bonded over the flight to Russia on how they both grew up in a tough neighbourhood. In Russia, Sam and Steve broke into a research Lab and found Baron Zemo trying to recreate the SSS. Sam chased after while Cap destroyed the machines but Zemo set of a grenade destroying Falcons wings and putting him in a coma. Cap grabbed Sam and left for the Hellicarrier where they put Sam on life Support and cut out the damaged wings.

Sam woke up with no wings in his back and asked Steve where they had gone to which Steve told him they were destroyed. Steve then took Sam to the Armour Room and showed him his new suit. Sam asked him where he got it from to which Steve said “From a Old Friend.

When Victor Von Doom escaped his S.H.I.E.L.D cell he suited up as Dr. Doom and began an attack on Manhattan. Sam, Steve, Clint and Natasha were sent to Manhattan where they saw Iron Man, Hank Pym in his Ant-Man alias along with his wife Janet and Thor.

The 7 Heroes battled Dr. Doom who defeated them with ease before killing them he was attacked by Hulk who knocked him. Sam told the 8 heroes that they saved the world much to Hulks annoyance as he thought of himself as saving the world. Sam said they should all become The Avengers a team that saved the world on a daily basis.

Retrieved from "https://marvelcomicsfanon.fandom.com/wiki/Sam_Wilson_(Earth-2226)?oldid=41158"
Community content is available under CC-BY-SA unless otherwise noted.