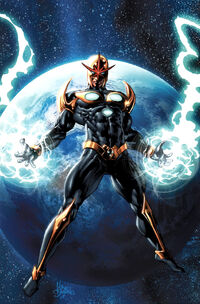 Sam Alexander, alias Nova's received his powers from the Nova Force, which gave him the ability to channel through his helmet. These powers include flight, enhanced durability, and the ability to absorb and release pulses of energy. However, Sam does not know the extent of his powers, let alone how they work. He was one of the young superheroes recruited by S.H.I.E.L.D. to join the Training Program along with White Tiger, Iron Fist and Power Man.

When Spider-Man was fighting the drones during a test on the S.H.I.E.L.D. Helicarrier, he quickly expressed his opinion albeit a bit arrogantly. When he and the rest of the team saved Spider-Man from his own inexperience of the Spider-Cycle, him and the Web-Slinger were already on bad terms, with Spider-Man calling him "Captain Bucket-Head". Later the team was sent to help the Web-Slinger fight the Frightful Four. After the fight, Spider-Man accepted the team.Sam along with the rest of the team, were enrolled into Peter (Spider-Man)'s high school.

His helmet grants him these powers and abilities because of its access to the Nova Force.

Retrieved from "https://marvelcomicsfanon.fandom.com/wiki/Sam_Alexander_(Earth-2210)?oldid=231035"
Community content is available under CC-BY-SA unless otherwise noted.