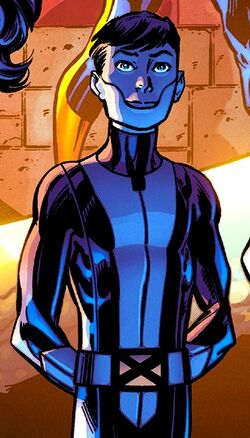 You're boring me. You should fight each other for my amusement.

Salvator is the child of Apocalypse and Emma Frost. His mother abandoned him shortly after his birth to seek refuge with the X-Men. Salvator was then primarily raised by his step-mother, Storm, and his godfather, Cyclops. His longing for attention from his father led to Salvator becoming very bratty and demanding of the soldiers and lieutenants in the army.

As his powers started developing, his father started to pay more attention to him, and even allowed him to executive several humans as a birthday present.

When Apocalypse led a group to raid Krakoa, Salvator was gleeful to join. He eventually found himself in a battle with X, the son of Charles Xavier, whom Apocalypse killed and absorbed years ago. Eventually, X proved too much for Salvator, and was able to use his telepathic abilities to completely lobotomize the child before killing him.

Retrieved from "https://marvelcomicsfanon.fandom.com/wiki/Salvator_(Earth-9999)?oldid=246110"
Community content is available under CC-BY-SA unless otherwise noted.