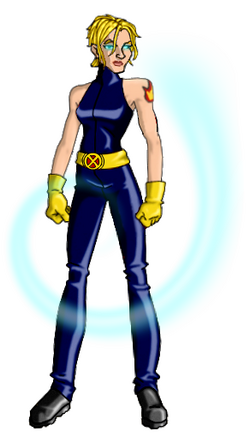 I can't be hurt. My force field prevents all harm, I'll never be strangled, shot, or run over by a car. But I also can't be touched. My gift is my curse. I can't touch, so I look to the X-Men for control.

Sally Blevins was orphaned in New York City at a very young age. She constantly had to beg for and steal food. Living on the streets was hard for Sally, but she knew that someday things would be better. One day, when she begged a man for food, he got very angry and tried to shoot her. Her mutant powers activated and she developed a force field that deflected a bullet and reflected it back to the man. With his dying breath, he tried to strangle her, but she slipped out of his grasp. After he died, she ran away, skating on her force field and fled under the streets.

There she found a new community of mutants secretly existing under the street and stealing food to survive. They considered themselves outcasts, and Sally was gladly welcomed into their group. She was given the name "Skids" since she skidded around and was untouchable. Soon, however, Charles Xavier approached the Morlocks, looking for Skids. He offered them all the ability to come join the X-Men, but only Skids accepted, because she was finally wanted. She joined the X-Men under the new name of Shield. Her powers were an asset on Krakoa, as nothing could catch her, but she could shred through nearly anything, since Fabien's enhancements allowed her greater super-speed and a sharp force field. After she left, she became an official X-Man and began a relationship with Cannonball. She is slowly able to completely control her powers, but they remain limited for now.

Frictionless Force-Field: Shield has a personal force field that provides total protection from all attacks. Her force field is completely frictionless, which make it impossible for anyone to hold on to her. Shield cannot be grabbed or entangled, and if Skids concentrates, she can extend her force field to protect others in her immediate area.

Super Speed: By "skating" on her force field, Shield can reach speeds of up to 40 MPH.

Kinetic Manipulation: Shield can absorb the impacts of kinetic energy into her force field, which strengthens it.

Weapon Expert: Shield has gained expertise with nearly all forms of weapons while living under the streets of New York City.

Retrieved from "https://marvelcomicsfanon.fandom.com/wiki/Sally_Blevin_(Earth-5)?oldid=59674"
Community content is available under CC-BY-SA unless otherwise noted.