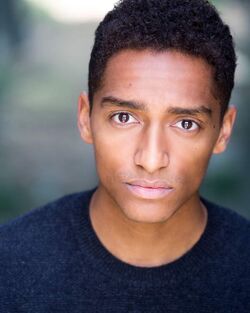 We live in a society where everyone fears mutants. Thinking they're monsters. Today, we're going to change that.

Black Warlock was born Salem Maxwell Jones-Whistler to Janiece Jones-Whistler and Jefferson "Jeffrey" Whistler in New Orleans, Louisiana, USA. His parents passed away when he was a newborn and he was taken in by Etterlene and Franklin Morrison. As a child, he was very sociable, outgoing and loved hanging out with other kids. But one day, Salem discovered his magical abilities which he started to slowly master on his own and soon, he started to show off his abilities to the other kids in the streets, wowing them with his illusionary abilities. He would start small magic shows in the neighborhood and all of the kids and even teenagers would see Salem perform.

However, all that changed when an incident occurred when one of his friends was being abused by his father. Fearing for his life, Salem hurried to help him until he too was attacked and beaten by the man, causing Salem to angrily retaliate by using a powerful magic spell which severely injured and crippled him. Realizing what he had done, he hurried home despite his friend calling him to wait. And he has been secluded in his home until he was comforted by Etterlene and Franklin, whom he told what happened and began to fear that his powers might be dangerous. After that incident, Salem began to isolate himself from the outside world, even shutting himself away from the kids he saw as his friends. But after the same friend he had saved from his abusive father that day, began to talk to him that everyone will still care for him, Salem soon comes out of isolation, much to Etterlene and Franklin's delight.

As Salem's life went back to the way it was, he faced another turn of events when he was only ten years old. After leaving his home to go shopping for dinner, Salem was taken from the streets by a group of men. His screams were heard by Etterlene and she hurried to find him being taken away by the men and tried to stop them, but she was too late as Salem was shoved into the van and drives away, leaving Etterlene horrified and devastated.

Salem was soon held captive at a facility run by a group of corrupt government agents who want to experiment on mutants and make them living weapons. For many years, Salem endured traumatic events that he didn't want to tell anyone about, and he wasn't alone. Young mutants like him were tortured and sometimes slaughtered right in front of him. As he was about to become the next pawn, Salem was saved by another group of mutants called the X-Men, led by Professor Charles Xavier, and he was taken under his wing after learning about him and his powers due to his own telepathic powers, and he was enrolled into the Xavier School for Gifted Youngsters.

After his traumatic years in captivity, Salem managed to adapt to the new environment and mingle with the other mutants while having nightmares of the events that tainted him. But he managed to conquer the trauma that afflicted him and started to show off his spells to his classmates and developing his spells to become more combat-ready. This prompted Professor Xavier to name him the Black Warlock after seeing how powerful his magic is.

After graduating from the school, Salem continued his powers to help people through vigilantism although humanity still despised mutants. Soon he met Gabriel Worthington and at first, he detested him due to his overconfidence and cockiness, but soon developed romantic feelings for him and they became engaged.

Salem would later reunite with Etterlene and Franklin in New Orleans after being gone for many years, igniting an emotional reunion and would frequently visit them on holidays or when he's out fighitng other evil mutants in the country.

Magic: Salem possesses the ability to master the mystic arts as a result of his X-Gene, allowing him to perform spells to fight off all incoming threats, hence his Magic Bolts being his main offense ability. He is able to manipulate any type of magic, summoning powerful spells by shouting their names. His magic is just as powerful as Doctor Strange's magical arts and can construct hard-energy such as force fields and can manipulate illusions. When not in battle, Salem uses his magic to help with everyday life sometimes.

Aside from his magic abilities, Salem is shown to be a skilled gymnast which he trained when he was at the Xavier School for Gifted Youngsters, making him very agile.

Equipment: His hooded cape designed and given by Doctor Strange.
Transportation: X-Men Blackbird
Weapons: None

Retrieved from "https://marvelcomicsfanon.fandom.com/wiki/Salem_Jones-Whistler_(Earth-7090)?oldid=265358"
Community content is available under CC-BY-SA unless otherwise noted.