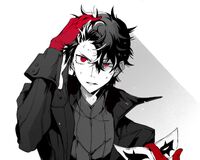 I need to focus, right now! Panicking, under-thinking, distractions are going to get us killed, Ms. Ghosh, so please help me help you kids get out of this mess by just toning that down a bit. Self-pity or even a semblance of doubt could decrease our chances of survival... No. You got this, Nik. Use what you know! Remember training. Be smart. Act quick. Survive!

Sagnik Nik Ghosh is an Indian writer and entrepreneur and the son of the retired famous professional hero, Cataclysm.