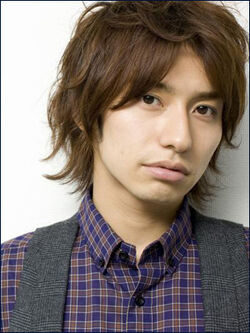 I am the crimson flame, the golden sun of Japan! I am SUNFIRE!

Sunfire was born Ryouichirou Yoshida, born in Agarashima, Japan to Shiro Yoshida, the original Sunfire and Emiko Yoshida, his betrothed. His powers began to surface, but it wasn't until he was eight years old when his powers fully awakened when a group of bullies started harassing his twin sister, Rina, who is also a mutant.

Witnessing Ryouichirou's powers fully summoned, Shiro decided to help train him on how to use his powers fully, but that started to worry Emiko. At the same time, Ryou would later get confronted by one of the bullies' fathers, which got Shiro involved, trying to keep the peace, but after the bully's father attacked Shiro, Ryouichirou's anger triggered and he unleashed a great fireball on the man, which severely burned half of his face and body.

The incident caused the bully to become scared of him and his father, calling Ryou a monster, causing the young boy to feel ashamed for coming to protect his father and he wound up running away from home and not looking back, much to Shiro, Emiko, and Rina's horror and sadness.

However, he was later met by Professor X, who found him all on his own, and managed to bring him back to Shiro and the others, bringing relief to the veteran mutant. Professor X decided to take both Ryouichirou and Rina to the Xavier School for Gifted Youngsters. Shiro agreed and it took a while for Emiko to come to an agreement.

During his first year, Ryouichirou was a bit reserved and often stayed out of the crowd while his sister opened up to everyone. But he managed to get out of it when he started to show his powers to his classmates and he began to make friends and his parents would come to see him occasionally.

Ryou soon became part of the karate and judo club at the Xavier Institute while training to master his powers with the help of Professor X and the veteran X-Men until he graduates.

After his graduation, he slowly started his career as a vigilante, dubbing himself Sunfire, in honor of his father. He later met and became romantically involved with Ameisha Watkins aka Khione, and married her later on.

Coldness: Since Ryouichirou's power involves fire and heat, he is vulnerable to cold temperature and weather. However, he isn't affected by Ameisha's cold-based powers due to him having a romantic bond with her.

Equipment: His X-suit.
Transportation: None
Weapons: None.

Retrieved from "https://marvelcomicsfanon.fandom.com/wiki/Ryouichirou_Yoshida_(Earth-7090)?oldid=256787"
Community content is available under CC-BY-SA unless otherwise noted.