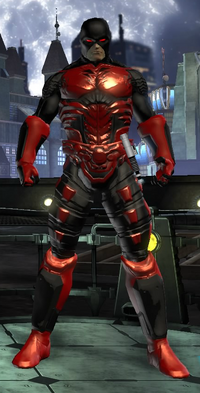 Growing up in a small town in Kansas, Ryan had a quite boring life. Until one day, riding his bike home from work, he was startled by a bright flash of light. He looked up to see a meteor fall from the sky, Ryan cycled his bike as fast as he could to the area it had landed, when suddenly, the alien rock gave an immense blast of radiation, knocking Ryan flying back unconscious. Waking up a few hours later, he headed home, but on his way home Ryan started hearing people's thoughts. After a few weeks had passed, he realized that the radiation blast had altered his life force, giving him inhuman abilities such as Telekinesis, Telepathy, Electric Manipulation and many more. Ryan was a member of a small group of heroes called "The Shadow Warriors" along with Reign, Phoenix Girl, Infinite Man, and Red Mist.

Retrieved from "https://marvelcomicsfanon.fandom.com/wiki/Ryan_Marek?oldid=232157"
Community content is available under CC-BY-SA unless otherwise noted.