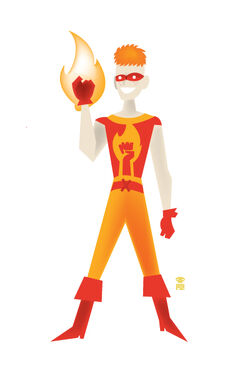 Russell's a bad name. I'd prefer you call me Rusty, Professor. As for my codename, so far, I've only ever used my pyrokinesis to punch people. Firefist is pretty funky, I'll go with that.

Rusty Collins was orphaned at a very early age. His father died the day he was born while overseas. And his mother died when he was a baby. He was taken in by an older couple, who loved him very much. Their son came to visit often, and he was very abusive towards Rusty. One day, he told the couple that he needed to join the Army since he screamed and complained too much about the abuse. The old couple rallied against him, so he killed them both, and Rusty legally fell into his custody. He briefly met his foster brother, but soon he was shipped overseas as well to join the Navy.

When his mutant powers activated, he melted a hole in the ship, and it sank. He was rallied against by the crew once onshore, until they were all telepathically frozen and mind-wiped. Cerebro had come to Rusty's rescue. He told him that his team of mutant followers had died, and he would like him to come replace and rescue them. Rusty agreed and was given a new costume. He ventured to Krakoa with the other secret team members, and was searching for the X-Men. He was a potent fighter, and took out many of Krakoa's monsters. He was the last one to "die," after finding out Krakoa was the mutant. Unlike his teammates, though, Rusty was actually killed.

Pyrokinesis: Firefist has the ability to generate heat and flames with his mind. These can come from his body, or he can start them elsewhere. He also can manipulate existing fire to his whim. These flames could melt concrete, steel, or stone. His control is so great that he can create fire underwater. He can also generate heat without flames to melt oncoming projectiles or cook food, and his flame has a property of only burning what he wishes, as he can burst into flame without burning his clothes.

Combatant: Rusty has formal army training in combat and weapons management. He excels with firearms, but prefers to fight unarmed.

Retrieved from "https://marvelcomicsfanon.fandom.com/wiki/Russell_Collins_(Earth-5)?oldid=59673"
Community content is available under CC-BY-SA unless otherwise noted.