Marvel Fanon
Register
Don't have an account?
Sign In
Advertisement
in: Characters, Templated Articles, No Dual Identity,
and 9 more 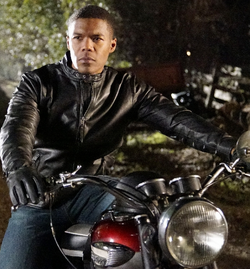 "Mack" (by his friends)
Identity

Ruben Mackenzie is the brother of S.H.I.E.L.D. agent Alphonso Mackenzie. Alphonso (or "Alfie," as he calls him) visited him after he was laid off from his job, and his brother soon discovered Ruben's life was spiraling out of control. Ruben began to sympathize with the terrorist group known as the Watchdogs as an outlet for his frustrations in life. Ruben soon realized the Watchdogs' true nature and learned about his brother's secret life as a S.H.I.E.L.D. agent when the Watchdogs attacked his house, mistakenly believing Alphonso was an Inhuman. The Mackenzie brothers fought off their attackers, but Alphonso was seriously wounded in the shootout. Agent Daisy Johnson, Alphonso's partner in S.H.I.E.L.D., assured Ruben that his brother would recover from his wounds, and suggested that S.H.I.E.L.D. might be interested in him now that he knows they exist.