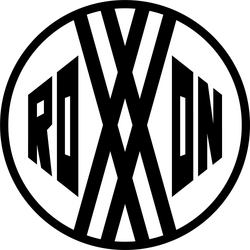 Roxxon Corporation was formerly named Roxxon Oil Corporation in 1946 and was led by Hugh Jones. One of their factories was the location for the exchange between Leet Brannis and one of Roxxon's scientists Dr. Miles Van Ert for the fatal Nitromene bomb based on one of Howard Stark's formulas. Agent Peggy Carter, with the help of Stark's butler Edwin Jarvis, managed to infiltrate the facility. However, Brannis used one of the bombs, and blew up the factory.

The Roxxon Corporation had a building in Los Angeles. The battle between Iron Man and Iron Monger took them in front of it.

The gas station in which both Phil Coulson and Agent Barton stopped at on the way to New Mexico used fuel pumps branded with the Roxxon logo.

In one of his public videos, The Mandarin threatened to kill accountant Thomas Richards from the Roxxon Oil Company if President Ellis of the United States failed to call him within 30 seconds. Although the the president complied with the request, the Mandarin ignored the call and, in a mock execution, pretended to shoot Richards in the head. Leading the President and all other viewers to believe Richards had been executed.

A Roxxon gas station was blown up by Tobias Ford during one of the missions of Phil Coulson's S.H.I.E.L.D. team. While Grant Ward was packing his baggage, a newspaper headline mentioned Roxxon was scheduled to cut 10,000 jobs.

Retrieved from "https://marvelcomicsfanon.fandom.com/wiki/Roxxon_Corporation_(Earth-1010)?oldid=177817"
Community content is available under CC-BY-SA unless otherwise noted.