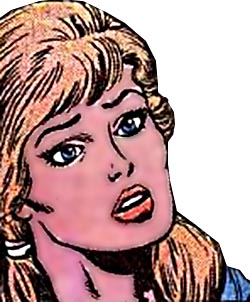 On occasions, Roxanne went with her father to watch performances by Johnny Blaze and his father Barton Blaze where at the Quentin Carnival.

After each show, Roxanne would meet with Johnny and they would date, it wasn't long before the two fell in love, one day Roxanne told Johnny that her father was sending her to live with her mother, because her father considered Johnny to be a bad influence on her.

After the death of Johnny's father Barton Blaze, (which was the result of a coerced deal between Johnny and the devil Mephisto) makes Johnny fear that he may harm Roxanne too if he stays near her, and so he puts distance between them and runs away.

Many years later, Roxanne, now an adult in her mid twenties, is now an Reporter on WHiH World News.

In Johnny's stunt show, she meets him and interviews him, when the show starts, Roxanne refuses to watch Johnny's jump, but when she's followed by Johnny on the highway, she tries to lose him but fails.

Upon catching her, Johnny tells her to go out for dinner, Roxanne accepts, only if Johnny isn't late.

When Johnny Blaze becomes the Ghost Rider, he begins to fight evil, so he forgets to meet Roxanne for dinner, the next day, she interviews a woman telling her about the incident on the previous night.

The woman tells Roxanne that she was saved by a man whose face was a skull and was on fire (Ghost Rider), later on' she goes to Johnny's house to ask him why he was late.

Johnny tells her the story of him making a deal with Mephisto and how he is forced to work for him at night as the Ghost Rider.

Roxanne doesn't believe his story and thinks he's either crazy or just making up lies, After Johnny Blaze transforms into the Ghost Rider again he's pursued by the police force, Roxanne sees his new appearance and realizes that he was telling the truth.

Johnny notices her, but, after being shot by the police, he takes off without a word. The next night a demon weakens Roxanne with his power and kidnaps her in an attempt to bring the contract of San Veganza that the original Ghost Rider, Carter Slade, has to him.

In the demon's hideout, Roxanne is released and tells Johnny to get up, who wants her to leave while he deals with it as Ghost Rider.

When Johnny is almost defeated, Roxanne manages to use a shotgun given to Johnny by Carter Slade to help him.

After the demon is defeated, Roxanne is engulfed by his appearance.

When Johnny replies "monster..." as he was ashamed of his appearance, she tells him she is "not afraid", and when she touches him as the Ghost Rider, Johnny reverts to normal with no harm to Roxanne.

Retrieved from "https://marvelcomicsfanon.fandom.com/wiki/Roxanne_Simpson_(Earth-1010)?oldid=123046"
Community content is available under CC-BY-SA unless otherwise noted.