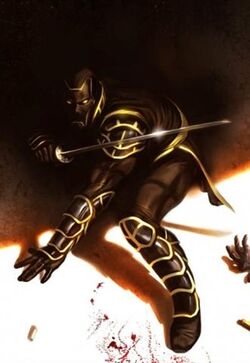 Marvel: The New 52
Base Of Operations
Characteristics
Gender

Noah was raised by a single parent who happened to be Trickshot the master assassin. Barney raised Noah as a fighter and assassin on Noah's 14th Birthday, Barney gave him a black outfit and the Codename: Ronin. Barney was then sent on a mission and placed Noah in the hands Freelancer Deadpool, Deadpool taught Noah in the ways of a Freelance Hero.

When Noah was 16 he began helping Deadpool kill and earn rewards but only got half of the cut. Ronin asked Deadpool to give him more money to which Deadpool declined. Ronin then beheaded Deadpool in front of his followers before unlocking a safe that contained a USB with the name of every Superhero and Villain and file with Important Businessmen that were worth lots of money. Ronin then packed up all of Deadpools money and left the building.

Retrieved from "https://marvelcomicsfanon.fandom.com/wiki/Ronin_(New_52)?oldid=223351"
Community content is available under CC-BY-SA unless otherwise noted.