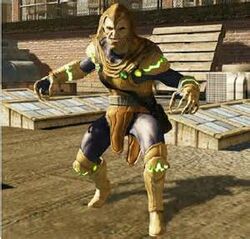 Little is known about Hobgoblin's life before the Civil War. It can be assumed to be similar to his mainstream counterpart.

Hobgoblin was one of the supervillains inducted into the Thunderbolts, and thus eventually the Fold. Hobgoblin was only freed when Cable - who managed escape the Negative Zone uninfected thanks to his Techno-Organic virus - copied the unused nanites the Alliance had acquired to create a third one (from two of them). After the Fold was defeated, Kingsley and the other two supervillains were imprisoned by S.H.I.E.L.D.

Retrieved from "https://marvelcomicsfanon.fandom.com/wiki/Roderick_Kingsley_(Earth-6109.2)?oldid=122561"
Community content is available under CC-BY-SA unless otherwise noted.