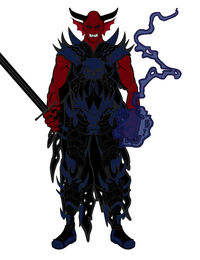 Roderick Kingsley was powerful and ruthless businessman who owned the fashion and cosmetics company Kinglsey Ltd. Because of his unscrupulous methods he wound up making a number of enemies including Narda Ravanna whose company had destroyed with a smear campaign. She lashed back and almost succeeded in killing him. After the experience Roderick became paranoid for his life and sought the means to protect himself from the looming threat of death. In part because he was brought up with a strict Catholic upbringing that would linger in his mind, leaving the threat of damnation hanging around in it.

As he was on the rise to becoming one of the wealthiest men in the world through his company Kingsley was invited to join a group called the Kobold Club that was made up of some of the worlds most powerful men including politicians, businessmen, and celebrities. A group that would have get-togethers where they'd perform mock pagan rituals. Kingsley wound up looking into the history of the group and found that it had roots in the Celtic clans of Europe from thousands of years ago in the form a cult called the Order of the Goblin. His men eventually found a hidden sanctuary in the region where the group was believed to have come from that contained a hefty book called the Codex Cobalus. The item he was searching for. A text of mysterious origins that by all accounts should not exist given the uniformity of the writing but how long it would have taken for it all to be put down.

When the Codex was brought into his possession Kingsley studied it thoroughly and eventually managed to use it to contact a celestial entity known as the Goblin God. In exchange for power and immortality Kingsley was tasked to find a way to bring the Goblin God into his dimension. He agreed and was imbued with the essence of the Demogoblin. The two sharing a consciousness and having the ability to change between forms at will.

However, there was a price that needed to be paid in blood for the transference of that power into the mortal realm to occur in the form of a human sacrifice. In that pursuit he brings a local smalltime hood named Arnold "Lefty" Donovan into the sanctuary. Claiming that he was just going to guard him whilst he explored the place. But when Donovan has his back turned Roderick pulled out a knife and snuck up on him. Though he had ordered people to be hurt if not killed before, having to do the deed himself was a new and nerve-wracking experience. He hesitated and Arnold turned. He saw the knife, pulled out a switchblade, and lunged at him. In a panic Roderick slashed his side. Arnold backed away, clutching his side in pain and the sight of blood made Kingsley begin to tremble. Enraged Arnold went after him again with wild slashes. Eventually managing to knock the knife out of his hand. The two got into a physical struggle where Arnold dropped his switchblade but ended with him picking up a stone rune and smashing it into Roderick's head. Kingsley was sent to the ground in a daze as Donovan stood over him and prepared to attack again. In desperation like an animal Kingsley took Arnold by surprise and bit his leg, which sent him to the ground in pain. Kingsley got up and scrambled towards his knife. Donovan got up and charged him again, leading to the two smashing into the sanctuary's altar. Roderick began to speak an incantation from the Codex as Arnold tried to force the blade down into him. Roderick again took Donovan off guard by head-butting him, which allowed him to flip him over onto the altar. When he finished the cant he plunged the dagger into Donovan multiple times. Killing him and completing the ritual. And thus he was bonded with Demogoblin.

Another such blood sacrifice would be required in order to bring the Goblin God itself into the mortal realm. Finding a proper avatar that could carry the Goblin God's power being Kingsley's task.

The first thing he did was attain the seat of chairman of the Kobold Club and form an inner circle that would bring the group back to their roots that would covertly help him influence the other members as well.

He'd eventually discover the X-Men and come to the conclusion that a member of the team named Jean Grey had the potential to serve as the Goblin God's avatar. Kingsley would eventually join forces with a longtime enemy of the X-Men called Mr. Sinister who presented a solution to his problem as he sought to create a clone of Jean.

Superhuman Strength: Demogoblin was superhumanly strong with physical strength roughly equal to Spider-Man's at the time, meaning he could lift about 10 tons.

Superhuman Speed: Demogoblin was capable of running and moving at speeds superior to that of the finest human athlete.

Superhuman Stamina: Demogoblin's musculature generated less fatigue toxins during physical activity than the musculature of a normal human. He could physically exert himself at peak capacity for several hours before the build up of fatigue toxins in his blood began to impair him.

Superhuman Agility: Demogoblin's agility balance, and bodily coordination were all enhanced to levels beyond the natural physical limits of even the finest human athlete.

Superhuman Reflexes: His reflexes were similary enhanced and were superior to those of the finest human athlete.

Superhuman Durability: The tissues of Demogoblin's body were somewhat harder and more resistant to physical injury than those of an ordinary human. He could withstand impact and blunt trauma forces that would cripple or kill a human being with little to no discomfort. For instance, he could withtand falling from a height of several stories without being injured.

Claws & Fangs: The Demoboglin's fingers were tipped with extremely sharp claws and his mouth was filled with rows of needle-like, razor sharp teeth that he could use in close combat situations if he preferred.

Magic Manipulation: The Demogoblin's body was filled with unique mystical energies that he used to create equipment similar to that used by the Green Goblin and Hobgoblin. This equipment typically consisted of a goblin glider that he used to fly through the air at speeds of at least 90 miles per hour, equal to the gliders used by the Green Goblin and Hobgoblin. He could also generate mystical weapons similar to those of the Green Goblin and Hobgoblin such as razor bats and pumpkin bombs which could emotionally paralyze his victims. He could also use his magical powers in more typical ways in combat situations such as firing beams of intense heat from his hands, though he preferred to use his goblin weaponry. His magical abilities come to him through the power of the Goblin Force.

Psionics: The Demogoblin also possessed limited telepathic capabilities that enabled him to track down and/or communicate with certain individuals.

Metamorphing: Can psionically alter his appearance at will. As a result hee can cause himself to look and sound like an exact duplicate of any human, humanoid, or semi-humanoid being of either sex, wearing virtually any kind of clothing. His control is so exact that hecan precisely duplicate another persons retina pattern in her own eyes, finger, palm and skin-pore patterns on her own hands and skin, and vocal cords to match voices to the point of corresponding voiceprints. He can even make himself the perfect form of a non-existing human. He uses this power to take on his Roderick Kingsley persona.

Retrieved from "https://marvelcomicsfanon.fandom.com/wiki/Roderick_Kingsley_(Earth-515)?oldid=250389"
Community content is available under CC-BY-SA unless otherwise noted.