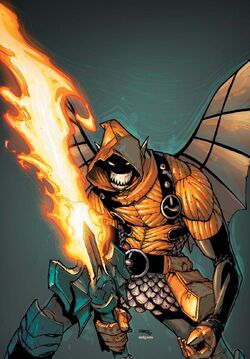 Let's put a smile on that face!

Roderick Kingsley dropped out of college because he didn't want to become a corporate stooge like his father. For a time, he made his fortune by selling drugs under the cover of a small perfume business. However, he was eventually raided, and barely managed to escape. He later found a new home in the organization AIM, where his creative evil genius was allowed to flourish.

With his new resources, he was able to create a flame sword, a glider, and a bulletproof Goblin suit, which he now uses to terrorize the masses alongside the other AIM Enforcers, and make life hell for the Squadron Supreme.

Retrieved from "https://marvelcomicsfanon.fandom.com/wiki/Roderick_Kingsley_(Earth-1515)?oldid=244611"
Community content is available under CC-BY-SA unless otherwise noted.