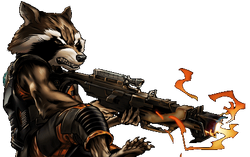 Rocket is a raccoon, or raccoon-like creature, enhanced by illegal genetic experiments into a sentient and technically proficient being. This experience was apparently quite traumatic as he remembers having been "torn apart and put back together." At some point in his life he met the sentient plant-life Groot, with whom he became partners in bounty hunting.

Rocket spent most of his life as a bounty hunter, teamed up with Groot to perform miscellaneous (and typically illegal) jobs, such as kidnapping and theft, in search of income. He ran into frequent trouble with the law and was imprisoned on numerous occasions, but managed to escape from confinement each time. Despite being a very capable bounty hunter he was frequently taken advantage of by both his employers and competitors alike, at times reaching the verge of bankruptcy.

His search for employment eventually brought Rocket to Xandar, where he staked out potential bounty targets in a crowded plaza. Eventually, he spotted Peter Quill - wanted for 40,000 Units by Yondu - and attempted to capture him during a fight between Quill and Gamora. The fight led to all four being arrested by the Nova Corps.

The group was later taken to the Kyln to be imprisoned, though Rocket was unfazed, boasting openly of his prison-escape history while being led inside. He called out Gamora for being a "lackey of a genocidal maniac" and daughter of Thanos, though she claimed that she was planning to betray Thanos and Ronan and sell the orb to a third party. Rocket himself was called a raccoon by Quill, though Rocket shrugged this off by claiming he was one of a kind.

Rocket and Groot quickly established themselves as hazards to the prisoners when one of them attempted to harass Quill, whom Rocket declared was their "booty". He was less concerned with Gamora's fate, and attempted to discourage Quill from intervening when Gamora was attacked by several other prisoners (including Drax), but Quill ignored him and successfully talked the others out of killing her. When Gamora later confessed that the Orb was priced by her buyer for 4 billion units, and offered to split the profit, Rocket agreed to formulate a plan to break the four out of the Kyln.

The next day, Rocket briefed Quill, Gamora, and Groot on his plan during lunch. He requested that Quill retrieve a prisoner's prosthetic leg, and had Gamora tasked with acquiring one of the guards' control devices needed to access the security watchtower. Rocket then explained that the final piece for their freedom is a control panel holding a Quardrix battery, which if removed would trigger the prison's emergency lockdown. However, as he was explaining this, Groot had wandered to the control panel and ripped the battery off, throwing Rocket's plan unexpectedly into action. As Quill and Gamora retrieved the items needed, Rocket berated Groot for causing chaos. Security drones and guards arrived and fired upon Rocket and Groot. However, Drax came to their aid and tossed Rocket one of the guards' weapons, much to the bounty hunter's pleasure.

The items required for the breakout were retrieved and the group, including Drax, locked themselves within the security watchtower. When Quill presented the prosthetic leg, Rocket laughed him off, revealing that the request was a morbid joke and he didn't need it at all. Rocket then initiated his plan; he switched off the prison's artificial gravity, took control of the security drones and then used them to propel the watchtower room out of the cellblock and into the prison's docking bay. Rocket and the others boarded Quill's ship the Milano to make their escape, but were forced to delay their departure when Quill went back to recover his Walkman.

The group headed to Knowhere, a mining colony established within the severed head of a gigantic celestial being. Here, the group went to a bar, where they waited for the Orb's buyer to summon them. Rocket, Drax, and Groot playfully gambled there while Gamora and Quill conversed just outside. The camaraderie between the escapees failed, however, when Rocket became drunk and started a fight with Drax. Intoxicated, a distraught Rocket accused Gamora and Drax of mocking him and seeing him as a "rodent" and a "vermin" and threatened to kill the others. Quill intervened before any harm was done, but the outburst (and the lack of progress towards his goal of killing Ronan) caused Drax to leave.

Gamora's buyer, Taneleer Tivan, eventually summoned them to his museum. Rocket, passing an exhibit of a live cosmonaut dog snarled an instinctive warning and the dog likewise snarled in return. When the group eventually met Tivan, Rocket was quickly moved to annoyance when Tivan referred to him as Groot's pet.

When the formalities ended, Tivan revealed what was inside the Orb: an Infinity Stone. He explained that an Infinity Stone was one of many powerful objects created by the Big Bang, so powerful that only the most powerful of beings were able to wield it, even if the burden of the power was separated among multiple people. Rocket was unimpressed by the explanation of the Stone's power and demanded that Tivan pay them. As Tivan was withdrawing the payment, one of his assistants, seeing a way to end her misery under Tivan's control, grabbed the Stone. The resulting explosion disintegrated her and knocked Quill and Gamora back. Groot managed to rush Rocket outside before the explosion could harm them.

Seeing the power and frightened by it, Gamora told the group that they should turn the Stone over to the Nova Corps, reasoning that such a power cannot be in any hands, especially Ronan's. Rocket objected to the decision since their prison break marked them as wanted fugitives by the Corps. Suddenly, Ronan's forces and the Ravagers (a group of outlaws that Quill was once part of before he stole the orb) appeared, with the former having been called to Knowhere by a vengeful Drax.

Rocket, Quill, and Gamora attempted to fight off Ronan's forces using industrial pods while Drax tried to fight Ronan and Groot stayed behind. Rocket managed to use his pod's durability to his advantage by crashing through Ronan's Necropods. Pursued by her sister Nebula and several other Necropods, Gamora attempted to flee into open space, but her pod malfunctioned due to its inability to function outside Knowhere and was promptly destroyed by Nebula. Rocket and Quill caught up with Gamora's unconscious body. Rocket sadly informed Quill that Gamora would not survive and to go back into the Knowhere. Quill ignored him and announced his coordinates to the Ravagers before exiting his pod to save Gamora, whereupon the Ravagers arrived and captured them.

Rocket returned to Knowhere, angered at Drax for baiting Ronan to Knowhere. Drax apologetically attempted to justify his actions by claiming he was overtaken by his desire to avenge the death of his family. Rocket replied by insensitively mocking Drax's family's death. Wanting to redeem himself, Drax offered to aid Groot and Rocket in rescuing Quill and Gamora.

Soon, Rocket confronted the Ravagers in Quill's ship, the Milano, gaining their attention by harmlessly firing upon the Ravagers' much larger ship, and transmitted a threat to do greater damage. Rocket then ordered the outlaws to release Quill and Gamora while Drax aimed a Hadron Enforcer at them. The tense stand-off was resolved when Quill announced that they were fine and had come to an accord with the Ravagers.

The group reunited, reviewed recent events and decide that it was up to them to prevent Ronan from destroying Xandar with his Infinity Stone. Rocket was doubtful that they would succeed, especially upon hearing that Quill only had "part of a plan" for stopping Ronan. However, Rocket was convinced to aid Quill when the latter passionately declared that life was giving them a chance to do something more than they were already doing (and after the others had all agreed to join).

With the Ravagers, the group outlined a plan to prevent Ronan from destroying Xandar; they would contact the Nova Corps and convince them to aid them, Quill and the Ravager leader Yondu would enter Ronan's ship, the Dark Aster, through a breach created by Rocket and Quill, and kill Ronan upon entering his chambers. Rocket attempted to get a Ravager's cybernetic eye removed as "part of the plan", but was quickly denied by Quill.

The plan went smoothly at first, but Yondu was unable to enter the Dark Aster due to damages to his ship, leaving Quill, Gamora, Drax, and Groot to fight Ronan while Rocket aided the Novas and Ravagers in preventing Necropods from attacking Xandar. Ronan used the Infinity Stone to blow a hole in the side of his own vessel and destroy the Nova Corps fleet, then easily brushed aside Quill and the others when they reached his chamber. In desperation, Rocket drove his ship into the new hole in the Dark Aster, severely damaging both his and Ronan's ships and knocking himself unconscious. Heavily damaged, the Dark Aster could no longer remain aloft, and as the ship fell Groot responded by creating a protective sphere of branches around his friends. Realizing what his friend was doing, a tearful Rocket begged Groot to reconsider, but failed.

Groot perished while protecting the others from the crash, leaving Rocket devastated and lamenting that he used to "call him an idiot". When he saw Ronan emerge from the fallen vessel unscathed, Rocket flew into a rage and charged at him, but was easily swatted away. Fortunately he landed near the wrecked Hadron Enforcer, which he quickly set about reassembling to a serviceable state, his reconstruction effort covered by Quill distracting Ronan with a song and dance diversion. With Drax's help, Rocket blasted the Infinity Stone out of Ronan's hammer and Quill hastily snatched it out of the air before Ronan could reach it. The Infinity Stone's power began to consume Quill as he held it until Gamora, Drax, and Rocket linked hands to share the burden. Quill then sealed it in a containment orb.

In the aftermath of the battle, Rocket secured a living twig that had once been a part of Groot and potted it in a small planting pot. The newly formed Guardians of the Galaxy were congratulated for their efforts, and pardoned of their crimes. Rocket joined the Guardians for more adventures, though lamented that he could no longer steal.

Weapons: Rocket maintains an ever-changing arsenal of weapons, in most cases improvised from any spare parts available.

Retrieved from "https://marvelcomicsfanon.fandom.com/wiki/Rocket_Raccoon_(Earth-1010)?oldid=182722"
Community content is available under CC-BY-SA unless otherwise noted.