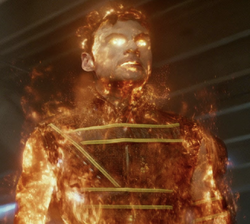 Earth-12221
Base Of Operations
The Outside
Characteristics
Gender

I've always loved the concept of the Avengers. The world's mightiest heroes coming together to fend off the threats no single hero can. But what we have here? With the Outsiders? This is bigger than anything I could've ever imagined. I'm honored to be a part of it.

Roberto da Costa was born in Mexico, but his family immigrated to California when he was a baby. His mutant powers manifested at the age of 15, and he initially tried to use them as a smalltown hero before he gained the attention of Captain America, who offered him a place in the Avengers' "Young Avengers" training program. He enthusiastically accepted, and went on to work alongside Spider-Man, Stature, Hulkling, Hawkette, Shadowcat, and Nova. Sunspot became good friends with his fellow Young Avengers, and often flirted with Hawkette.

Sunspot was recruited into the Outsiders under the threat that one day in a battle, he would lose control of his powers and accidentally kill Captain America, and be put in prison in the Raft. Unwilling to let this happen, Sunspot joined the Outsiders and quickly became dedicated to his new team. He even quickly fell in love with fellow fire-based hero, Firestar.

After going on several missions with the Outsiders, Sunspot sacrificed his life during a mission to Earth-42420, where they had to prevent the Hulk from destroying the Alps and obliterating the European cities beneath. While the other Outsiders evacuated the cities, Sunspot took on the Hulk to distract him, and eventually fell in battle.

[[Category: In a relationship with Johanna Storm Characters]]
Retrieved from "https://marvelcomicsfanon.fandom.com/wiki/Roberto_da_Costa_(Earth-12221)?oldid=245835"
Community content is available under CC-BY-SA unless otherwise noted.