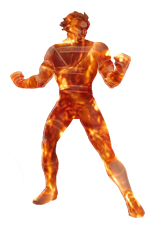 Black
Unusual Features
Usage of his powers causes Sunspot to become cloaked in darkness as he uses up all the ambient light in his body.
Status
Citizenship

I thought being the hot-headed jerk was my job.

Roberto da Costa is the son of Brazilian millionaire Emmanuel da Costa and his American wife Nina, an archaeologist. Roberto first manifested his superhuman mutant powers when, at the age of fourteen, he was playing in a championship soccer match for his school team in Rio de Janeiro. Motivated by racial hatred, a boy named Keller and another member of the opposing team knocked da Costa to the ground. The hot-tempered da Costa retaliated by tackling Keller, who began brutally beating him. It was then that, without being aware of what was happening to him, da Costa first manifested his superhuman strength. His body and clothing temporarily turned black in the process, and he inadvertently hurled Keller away from him. Confused and frightened, da Costa sought help, but both the other players and most of the spectators panicked and fled. However, his girlfriend, Juliana Sandoval, who had been watching the game along with Emmanuel, stood by Roberto in his time of need.

During the war with the Sentinels, Sunspot joined the resistance group known as the Free Mutants.

Solar Radiation Absorption: He can absorb solar energy and can utilize it for physical strength. The cells of a normal human body convert energy from foodstuffs into a form of energy usable by the body. This energy is stored through converting molecules of adenosine diphosphate (ADP) in the cells into adenosine triphosphate (ATP); the energy is released when necessary by breaking a chemical bond in the ATP molecules, converting them back to ADP. Apparently Sunspot can store solar-derived energy in his cells through the same, or a similar method, and release it when necessary to enhance his physical strength. His body is cloaked in darkness because he drains all the ambient light from his skin.

Combat (Unarmed/Armed): Sunspot has been trained by mutants in combat.

Athlete: Roberto is a very skilled soccer player, and used to play for his high school soccer team.

Multilingual: Roberto speaks English, Spanish, and is fluent in Portuguese.

Retrieved from "https://marvelcomicsfanon.fandom.com/wiki/Roberto_da_Costa_(Earth-1010)?oldid=256290"
Community content is available under CC-BY-SA unless otherwise noted.