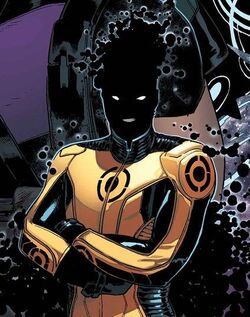 I always admired the concept of the Avengers. The strong and mighty coming together to protect those who can't protect themselves. The only advantage I see in my possession as a Hero for Hire, is that I get paid.

After running away from his family out of fear that they would find out he was a mutant, Roberto da Costa eventually crossed paths with a young man named Sam Guthrie, who was also a mutant. The two quickly became friends and agreed to always look out for each other. Eventually, they were approached by members of the X-Force, Scott Summers and Jean Grey, who offered to give them a home.

But Robbie and Sam knew if they joined X-Force it would put a target on their backs by broadcasting to the world that they were mutants. So they rejected the offer and continued on their own. Eventually, they discovered the rise of the company Heroes for Hire, run by Luke Cage and Iron Fist. They had virtually no money, wanted to be able to use their powers to help people, but didn't want anyone to know they were mutants. So, they sought out the Heroes for Hire.

They were each given an audition, and impressed the Heroes for Hire, as well as their publicist, Gideon Murphy. They were chosen to become the new Heroes for Hire, but worked out a cover story with Gideon for their debut. Robbie and Sam were both experimented on by mad scientists studying "dark matter" and the "speed force", which ended up giving them both powers. This way, they could be heroes without having to be branded as mutant heroes.

Robbie was given the code name Sunspot, and quickly became very popular among civilians. He even did interviews with reporters and went on talk shows to promote their business, and eventually, the fame started to go to his head. He became arrogant and selfish, which resulted in he and Sam, now going by Cannonball, drifting apart. However, Robbie was too invested in his new superstar life to even notice there had been a change in their friendship. It wasn't until he was caught hooking up with the Black Cat that he and Cannonball finally got into an argument about their place on the team, and Sunspot was even reprimanded by Luke Cage, who agreed that his attitude had no place on the team. Robbie took a serious look at himself, and agreed to temporary suspension so that he could find the kindhearted, compassionate person he once was.

Retrieved from "https://marvelcomicsfanon.fandom.com/wiki/Roberto_da_Costa_(Earth-101)?oldid=249065"
Community content is available under CC-BY-SA unless otherwise noted.