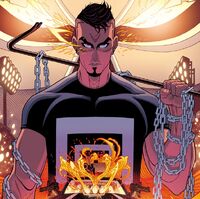 In 11th grade, Roberto Reyes dropped out of school to help support his family. He turned to crime and joined the Chain Gang and quickly rose through their ranks. As a member, he earned the nickname The Hellcharger due to his impressive mechanical aptitude.

During a battle with the Blue Krüe and the Slingers, one of the Chain's suffered a fatal heart attack. Reyes recognized that his teammate had been using OZ before his death. When the Slingers approached him with information connecting to rival gang Goblin Nation and Oscorp, Hellcharger led the Chain Gang in an effort to end The Goblin's hold on his neighborhood.

Retrieved from "https://marvelcomicsfanon.fandom.com/wiki/Roberto_Reyes_(Earth-774237)?oldid=186024"
Community content is available under CC-BY-SA unless otherwise noted.