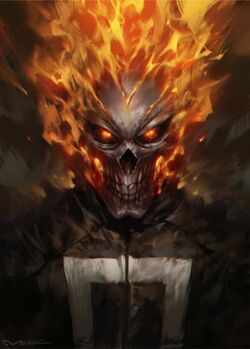 Brown,
None (As Ghost Rider)
Hair

Black,
None (As Ghost Rider)
Unusual Features
Ghost Rider has the appearance of a flaming skeleton.
Status
Citizenship

Single
Occupation
Mechanic, street races pilot
Education
High-school dropout
Origin
Origin
Gained the powers of the Spirit of Vengeance after dealing with the "Devil," in order to save his brother Gabe Reyes and punish the souls that did him wrong.
Place of Birth
Los Angeles, California
First appearance
Modern Comics: S.H.I.E.L.D. Vol 3 24

I didn't ask for this, this curse. But vengeance calls.

Roberto "Robbie" Reyes is a young car mechanic from Los Angeles who, having been murdered by the Fifth Street Locos, was resurrected by Johnny Blaze and gained the power to transform into a demonic being known as the Ghost Rider. Seeking revenge for his brother's disability, Reyes used the Ghost Rider to hunt down and kill various criminals until he was tracked down by Quake, who sought to end the Reyes' massacres.

Only a year before his origins turned him into the third Rider, Robbie and his younger brother Gabriel, found a knocked out and an injured Daredevil (who was injured during a confrontation with the Ghost Rider against the demon, Blackheart) while they were driving across Hell's Kitchen in New York, during a vacation trip. Shocked to see the hero on a horrible state, they decided to take him to a hospital, however Robbie insisted to just take him on their apartment in Manhattan, in order to protect themselves from the authorities, especially his younger brother.

After an hours of treating and have him taken care the mysterious man inside the Reyes' home, they decided to keep his identity secret by keeping the make on him. After waking up, the Guardian Devil then honored and thanked Robbie and Gabriel for saving his life, telling them that their actions for helping them proved that there is still good on this world, and one day the world would be able to see that everyone can be heroes, before he immediately left their home.

This was later proven to be true, as Robbie had become the third Ghost Rider, protecting his hometown in Los Angeles from every criminal that causes harm and danger towards the innocent, even though his way of eliminating crime might have been like the rest of the Riders, extreme and deadly, Robbie still saved a lot more lives than the ones that he had taken.

Eventually Quake led Reyes to S.H.I.E.L.D. and he assisted them in battling against Lucy Bauer and her search for the Darkhold which contained an ancient power. Learning that his uncle Eli Morrow had planned and succeeded in getting tremendous and strange powers, he helped S.H.I.E.L.D. to kill him, but in the process Reyes let himself to be teleported to another dimension (perhaps another version of the realm known as Hell), leaving his current whereabouts unknown, until Reyes managed to escape and return to Earth, just in time to help S.H.I.E.L.D. take down the insane Aida (now an Inhuman), and rid the world of the Darkhold for good.

The Rise of Chthon

After Aida was finally defeated, Reyes then took the Darkhold and used his powers to open an Inter-Dimensional Gate towards "Hell," once again leaving the Earthly Plane, where he would start a new journey on his own, finding the safeguarded and sacred temple located at the terrains of the dark and mysterious realm that he was travelling to. Upon his perilous and risky journey, Robbie was able to locate the island where the temple was located. However, just as he was about to enter the palace, he finds himself surrounded by a group of unidentified ancient sorcerers longing to get the Darkhold from Robbie. Confused to why the would want to get the book from him, the sorcerers never said a thing upon his question, and with it, they suddenly went aggressive towards Robbie and attacked him without any other response.

As a result, Robbie and the sorcerers have engaged between a brief but destructive battle, forcing Robbie to eventually unleash his inner demon, releasing the Spirit of Vengeance turn him into the Ghost Rider once more, now giving him the upper hand on battling the one of the most powerful sorcerers that he had ever faced. Close towards winning against the sorcerers, Robbie was just about to confront the leader of the sorcerers, whom they finally revealed themselves as the Broodlings of Chthon. Suddenly, the Spirit itself became familiar with the word "Chthon."

However, upon trying to remember where it came from, one of the sorcerers was able to grapple the Darkhold from Robbie, giving the Broodlings the chance to finally use the secret texts and spells of the Darkhold in order to fulfill their longtime objective, much to Robbie's confusion to figure out what it was.

Seemingly those of the first and the second Ghost Rider. He can also duplicate himself when near or inside his car.

Retrieved from "https://marvelcomicsfanon.fandom.com/wiki/Roberto_Reyes_(Earth-61615)?oldid=225287"
Community content is available under CC-BY-SA unless otherwise noted.