Look into my eyes and feel the pain of the innocent.

The spirit of the Ghost Rider was passed into Robbie Reyes after he suffered a near death experience. Ever since, he has been traveling the world righting wrongs against those who torture the innocent. This eventually made him the perfect candidate to join the Ultimate Alliance and fight against the Cabal. 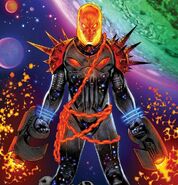 New Fantastic Four
Add a photo to this gallery
Retrieved from "https://marvelcomicsfanon.fandom.com/wiki/Roberto_Reyes_(Earth-6110)?oldid=252433"
Community content is available under CC-BY-SA unless otherwise noted.