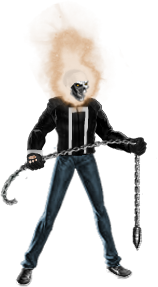 Black, (as Robbie)
None (as Ghost Rider)
Unusual Features
Ghost Rider has the appearance of a flaming skeleton.
Status
Citizenship

I died, and there's nothing, there's just darkness. Then I heard a voice, asking me if I wanted a second chance, did I want to punish those who hurt my brother, did I want to avenge my own death? I answered yes, more than anything yes. I was alive again, and you're right, there was someone there when I came to. But it wasn't a good Samaritan; it was the devil. Whatever was inside him, he passed it into me.

Robbie Reyes was raised in East Los Angeles by his uncle Eli Morrow with his younger brother Gabe. Robbie dropped out of high school in eleventh grade. One day, as Robbie and Gabe were cruising around the neighborhood, a group of the Fifth Street Locos fired at their car, lighted it on fire, and let the two brothers die. The injuries suffered in the attack caused Gabe to lose his ability to walk, and Robbie died. Robbie's last thought was a call to help to anyone who would listen, be it God or someone else, to save Gabe. In the darkness, Robbie heard a voice asking him if he wanted to avenge his death.

Robbie said yes and a moment later he was alive again. A mysterious stranger on a motorcycle appeared and pulled Gabe to safety out of the burning car. The stranger then approached Robbie, revealing himself to be a demonic being with a flaming skull for a head. The stranger touched Robbie, transforming him into a being similar to himself, the Ghost Rider, and then left. Robbie never told Gabe the truth about what happened that night. Eli Morrow was later jailed on charges of attempted murder, but he told Robbie that this person deserved it. Robbie had to find work as a mechanic at Canelo's Auto and Body in order to support himself and his brother.

Having gained the power of the Ghost Rider, Robbie Reyes used this power to track down and bring vengeance upon those who deserved to die. This included members of the terrorist group the Watchdogs, a dirty detective with blood on his hands, city councilman Roger Perez and the pedophilic school teacher Thomas Wright. This activity made the Ghost Rider a feared symbol in Los Angeles, with his story being told and his image being spray painted on walls.

Retrieved from "https://marvelcomicsfanon.fandom.com/wiki/Roberto_Reyes_(Earth-1010)?oldid=182103"
Community content is available under CC-BY-SA unless otherwise noted.