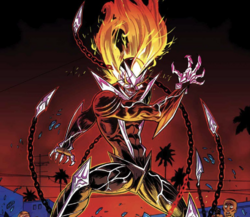 Robbie, The Devil of LA
Identity

Go ahead and pray. No Gods are listening.

Robbie Reyes was never too interested in school. He preferred to spend his time repairing and designing cars. He barely managed to graduate, but didn't care too much, as now he had more time to work in the garage.

Eventually, the local gangs started coming to him with requests to buff the bullet holes out of their cars. Robbie agreed out of fear for his family, but after being questioned by the police, he decided he had to stop. He thought it would be okay, but one day when he was taking his little brother, Gabe, for a joyride, and one of the gangs decided to choose that time to strike.

Their car crashed, and Gabe was paralyzed. Robbie, on the other hand, died gruesomely by snapping his neck and puncturing his entire ribcage partially through his heart. As his soul began to leave his body, it was approached by the demon, Mephisto. Mephisto promised him that if he agreed to become the Ghost Rider, he would ensure that Gabe survived his injuries.

Robbie desperately accepted, only to learn that Gabe would spend the rest of his life in a wheel chair. That same night, he discovered he had become bonded to the demonic spirit of Zarathos, turning him into the Ghost Rider. Robbie was horrified, and at first believed he was in Hell, only to learn he had accepted the responsibility to hunting down select targets for the Devil himself: Mephisto.