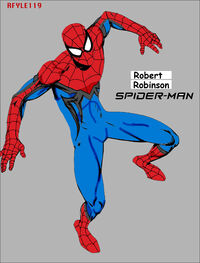 -- Robert when he's using his powers to do anything after tests.

Robert grew up with his father, doing science projects as a father and son team. He was bitten by a spider at a science fair as OsbroMax. After he got home he showed his father his spider-powers and talked about how he could become famous or something. But his father told him that he could be better by helping people, using his intelligence, and thinking ahead; not just smiling at the camera and being greedy. He told him the motto about being responsible with his actions. Robert understood and would eventually follow his advice.

After developing his powers, Robert beat up his childhood bully Jason Thompson as payback for his years of torment. His mother and uncle tried to teach him to be better. He decided to challenge himself by using his powers to wrestle.

After arriving home from a workout, he discovered the police at his house. His mother was alive, only injured, but his uncle was in critical condition. He found out that the robber/mugger got a tattoo on his right cheek and angrily pursued him, wearing the makeshift suit (based on the Homecoming version). He found him, and remembered him as the same guy than had run past him the other day, he asked him why, and the man gave him excuses. He bested him by dodging his bullets and pushing him out the window. The man was injured, and Robert left him for the police to take him in. He rushed to the hospital to check on his uncle and mother. His uncle told Robert the same lessons like his father did, and he and his mother comforted each other.

During this time, Robert's childhood friend Megan "MJ" Jones comforted him through his ordeal as well. He liked her a lot, and she also developed a crush on him, and they got to meet regularly in the same class. Eventually, Robert confessed his secret double identity to MJ, and the two began a romantic relationship.

Robert and his mother were at home talking about the fact that the mugger is gone (he died of natural causes). When they watched TV, Robert turned up the volume, watching Whitney Chang reporting that Horizon High been attacked by thieves using weapons. Robert told his mother that his girlfriend worked there, and his friends and classes were there too. He left to go there, telling his mother not to wait up for him, and she responded that she always did. Dressed as Spider-Man, he rushed to Horizon High to stop the thieves and help people. He noticed that the robot drone that stopped them was summoned by MJ. They worked together and were able to stop the thieves.

At some point, he found his father's briefcase in his basement, which revealed that a plane crash that killed his father, and that his father had worked for OsbroMax with Dr. Kent Reyves in cross-species genetics.

Robert hung out with his friends and his girlfriend, until there’s danger in the neighborhood. As Spider-Man, he teamed up with different heroes against different villains. His first meeting was with Captain America, fighting against Assassin 8 and some Hydra members. His second meeting was with Iron Man, who showed him some technology at Stark Enterprises, and offered him an Iron Spider Suit, which he kept in case of emergencies. His third meeting was with Thor, which made him blush as he thought about MJ getting mad at him for seeing other girls. He might tell her the same thing about seeing other boys/superheroes.

Robert was approached by the Director of SHIELD - Nick Fury, who made him an offer to be part of something great.

Seemingly those of Peter Parker of Earth-616 and of Miles Morales of Earth-1610.

Seemingly those of Peter Parker of Earth-616 and of Miles Morales of Earth-1610.

Seemingly that of Peter Parker of Earth-616 or of Miles Morales of Earth-1610.

Retrieved from "https://marvelcomicsfanon.fandom.com/wiki/Robert_Robinson_(Earth-9271363)?oldid=251240"
Community content is available under CC-BY-SA unless otherwise noted.