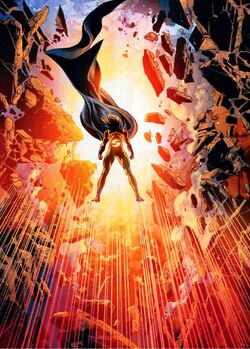 -- Cornelius Worth lying about the Sentry's existence

According to S.H.I.E.L.D.'s oldest archives, the alleged legend or myth of the Sentry has originated way back in the late 1940s, the discreet Project: Sentry was secretly formed by the joint American and Canadian government operation from the remnants of Project Rebirth in an attempt to create new Super Soldiers. They began to use the remaining blood samples of such super soldiers like Steve Rogers but the effects were not enough adequate nor unique. They once suggested to used the mutant's then-mysterious X-Genes to replicate the serum, but the superiors were mutant-phobic at the time, still seeing them as a possible factor for worse mutations and diseases, leading to the cancellation of the idea. In the end, however, they finally decided to use the cosmic radiation emitted by the mysterious Isotope-8, an extraterrestrial material and power source that releases different kinds of energy, as a baseline to enhance the serum.

Interestingly enough, Project: Sentry weren't the first ones to notice this strange material, and found themselves against the Soviet Union (secretly along with Hydra) and a young S.H.I.E.L.D., who were also trying to get it during the era of the Cold War. Despite this conflict to obtain Isotope-8, Project: Sentry were able to obtain enough samples of the isotope for the synthesis of the serum they desired to develop, before eventually forcibly losing most of it to other organizations. One fateful night, Robert Reynolds, a supposedly recovering meth addict, desperately broke into the laboratory of Professor Cornelius Worth, the main scientist of Project: Sentry responsible for successfully developing and perfecting the Golden Sentry Serum, the finished product on the secretive program.

Consuming the compound, Robert Reynolds gained the power of "a million exploding suns," as the surviving people who first witnessed it had described, including his best friend, brother figure, and later fellow soldier, Billy Turner. This act accidentally killed his other friend, who was also a fellow recovering addict, and the lab's guards in the process. He then asked the Professor to make more for himself. Project: Sentry, appalled at what their irresponsibility had wrought, persuaded Reynolds to let them test his powers at their facility, but they could not contain him for long, nor curb his desire to use his powers for the greater good of all, and the Sentry debuted before a world that has yet to be accepting the existence of superheroes other than the legendary and presumed deceased Captain America. After unexpectedly trouncing a group of Russian terrorists and preventing them from bombing a local mall, Reynolds finally agreed to return working with Project: Sentry so they could help understand his new superhuman condition ever further and upon his agreement, had the organization craft together a suit of armor for him, despite being unnecessary due to his mighty powers, and made his debut as the legendary heroic figure of the Cold War known as the Sentry.

From the late 1940s to the early 1970s, the Sentry had a lot of action in Soviet territory, constantly moving around the world due to the ongoing conflict of the Cold War. The arrival of the Void, a shadowy monster that exploited its enemy's greatest fears, ended the Sentry's charmed life as an operative and war hero. In reality the Void was Reynolds' own repressed persona, powered by the Sentry's own powers. At some point during a mission in Russia, Soviet soldiers (who were also secretly Hydra operatives) had temporarily stunned Reynolds and brought him to Johann Fennhoff, who implanted a "mental virus" in the Sentry's mind using the irresistible Faustus method. This virus, something that would eventually be dubbed as the "Void", created delusions that if the Sentry used his powers, a devil would appear, intent on destroying the world. The Void would have nearly driven Sentry to murder over one hundreds of thousands of people across Russia at that moment, only to be prevented by his own best friend and war sidekick, Billy Turner, after the latter unfortunately sacrificed his own life to revert back his own friend to his normal state.

Even cosmic threat of the Sentry being possessed by the Void persona were one of the major factors that sparked the historical Cuban Missile Crisis, unbeknownst to most historians and participants during the long war. Consumed by guilt for being unable to control his powers, which have gotten his own friend killed in his hands, a grieving Reynolds left Project: Sentry and subsequently disappeared from the face of the Earth altogether, leaving his whereabouts unknown for the next following decades, or so most who have heard have been told about what supposedly happened.

Unbeknownst to everyone, Robert actually sacrificed himself by selflessly stopping a series of Soviet missiles en-route to the United States, forcibly dragging them until he and the missiles reached the Earth's orbit, saving the lives of millions in the United States. In order to stop the active missiles, Reynolds used most of his utmost superhuman strength and stamina to drag the missiles and though the mission was successful, Reynolds was lost somewhere. In response to his M.I.A. status, Project: Sentry decided to assume Reynolds to have died, blindly believing that no one (not even a superhuman as powerful as him) could have survived a powerful blast (comparing it to explosions consisting of hundred nuclear bombs), despite Professor Cornelius Worth's optimistic and slightly-accurate theory that he might still be out there, alive but not well. With his presumed death, his existence was also basically erased, having all his documents redacted under the orders of the very joint American and Canadian government operation who sanctioned the Sentry program to begin with, before shutting down, deciding that they deemed Project: Sentry as another failed attempt to resurrect Project: Rebirth.

Chemically Enhanced Physiology: The Sentry's superhuman powers and abilities mainly derive from Golden Sentry Serum. The experimental serum creates a phase-shift in his molecules, causing the Sentry to become partially out of sync with normal reality. The serum induces a photosynthetic reaction, resulting in a hyper-state of consciousness. Though most of his powers and their limits are still unknown, the Sentry has been said to have the power of a million exploding suns, with Cornelius Worth even comparing his godly power to be on par with the alternate reality Eternal that was Zor-Ran, the hero known as Hyperion. He was stated to be an Omega-Level Threat by the Nova Corps, and Nick Fury's intel hypothetically classified him as Power Level 10 or even higher.

Retrieved from "https://marvelcomicsfanon.fandom.com/wiki/Robert_Reynolds_(Earth-61615)?oldid=235437"
Community content is available under CC-BY-SA unless otherwise noted.