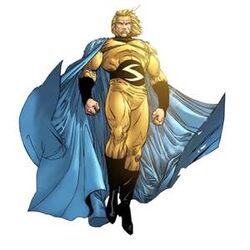 Little is known about Sentry's life before the Civil War. It can be assumed to be similar to his mainstream counterpart.

Equipment: CLOC, an artificial intelligence designed to monitor the world for emergencies and inform Sentry of the most important ones. It is also used to inform Robert of things such as how Lindy is at any given time.
Transportation: Quinjet
Weapons: None known.

Retrieved from "https://marvelcomicsfanon.fandom.com/wiki/Robert_Reynolds_(Earth-6109.2)?oldid=128914"
Community content is available under CC-BY-SA unless otherwise noted.