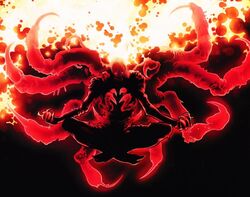 I make the skies blacken with a thought, storms rage with a whisper, life ceases at my command. I am everything you are not; where you are weakness and hope and human I am strength and terror and divine. You will know these truths soon, Kenneth.

Robert Reynolds was an addict prior to gaining his abilities, and in a strained marriage to Lindy Reynolds.

After being exposed to energies that were present in the Negative Zone, Robert changed for the worse. Now on the ultimate high, his humanity and normal life trickled away as he performed one immoral act after another with his new powers.

It came to a head when his then wife, Lindy Reynolds, filed for divorce and left him. Finally with nothing connecting Robert to humanity, he snapped and at last completed his descent into madness, becoming the Void.

Robert, fully embracing his insanity and immorality, terrorized Las Vegas over several months. He committed dozens of viscous and horrific crimes upon its populous.

Unsatisfied with the lack of challenge, Void set out to find a being worthy of his attentions.

Void gained his powers after being exposed to unidentified energies from the Negative Zone years ago. Due to this, he possesses incredible powers far beyond most other super-humans.

Class 100+: Void's physical might is seemingly even greater than Sentry's.

Retrieved from "https://marvelcomicsfanon.fandom.com/wiki/Robert_Reynolds_(Earth-42180)?oldid=213233"
Community content is available under CC-BY-SA unless otherwise noted.