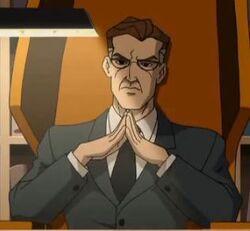 Senator Kelly was a staunchly anti-mutant United States Senator. He argued that mutants made normal people afraid and that mutants should be registered in order to know who they were and what they could do. He believed the American people had a right to decide if they wanted to send their children to school with mutants or to be taught by mutants.

Kelly was a persuasive public speaker

Retrieved from "https://marvelcomicsfanon.fandom.com/wiki/Robert_Kelly_(Earth-1010)?oldid=136233"
Community content is available under CC-BY-SA unless otherwise noted.