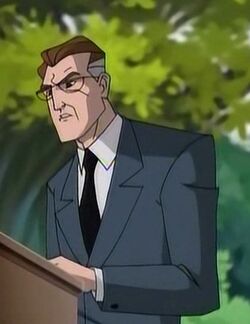 The Bigot Who Killed Mutantkind
Identity

Earth-101
Base Of Operations
His Mansion
Characteristics
Gender

I will do whatever it takes to defend my people! My human people.

Robert Kelly was a New York Senator who always had very conservative views. When mutants became a commonality, Kelly was the first to go public with his opinion. It was quite simple, he hated them, and he wanted them eradicated.

He eventually signed a government contract with Bolivar Trask to begin commissioning Sentinels in order to wipe out mutantkind. However, not long after, Kelly was abducted by the shape-shifting mutant Mystique, who proceeded to take his place.

Kelly himself was taken to the Brotherhood of Mutants's base on Asteroid M, where Magneto confronted him and questioned his beliefs. Kelly called him a monster and an abomination, saying that if he killed him then he would only be proving him right. Magneto smirked at this notion, and impaled Kelly with a metal shard taken from a Sentinel.

Retrieved from "https://marvelcomicsfanon.fandom.com/wiki/Robert_Kelly_(Earth-101)?oldid=250007"
Community content is available under CC-BY-SA unless otherwise noted.