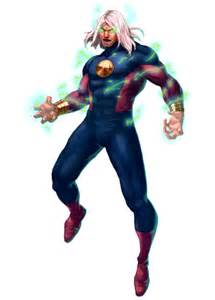 Little is known about Nitro's life before the Stamford incident. It can be assumed to be similar to his mainstream counterpart.

In a television broadcast of the New Warriors, the team fought supervillains Coldheart and Nitro. Once pinned up against a bus by Namorita, Nitro created a massive explosion, ending over 600 lives and causing the Superhuman Registration Act to be enacted.

Retrieved from "https://marvelcomicsfanon.fandom.com/wiki/Robert_Hunter_(Earth-6109.2)?oldid=135198"
Community content is available under CC-BY-SA unless otherwise noted.