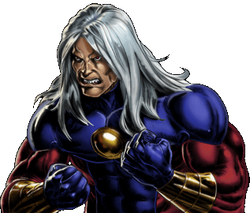 Robert Hunter was an Inhuman born in Scranton, Pennsylvania, who earned the ability to explode and reform himself at will. However, since the Inhumans were unknown at that time, they assumed he was a mutant and he embraced it fully, seeing how far that race had come in terms of acceptance. He was contacted by the Brotherhood of Evil Mutants after Rogue left their ranks. Due to his affection towards the Hellfire Club White Queen, she uses him as her pawn also.

Realizing he was really an Inhuman, and seeing how much the world hated them, he joined the Watchdogs as an Inhuman-hating mutant. His true origin was uncovered by Senator Devi Deol, but he killed her before she could tell the Superior.

Self-Explosion: Nitro possesses the superhuman ability to literally turn himself into a living bomb. Nitro can blow up his entire body at will and exists in a sentient, gaseous form until he reconstitutes himself. Typically, Nitro's maximum blast force is equal to about 250lbs of TNT. However, his power was enhanced far beyond his original limits, sufficient to level the city of Stamford, Connecticut.

After he explodes, he can reconstitute himself at will and can remain in this gaseous form for an indefinite period of time. Nitro also generates a type of kinetic field around his body that also allows himself to reconstitute the clothes he wears at the time he explodes.

If an individual can get close enough to Nitro, less than a few feet, it nullifies Nitro's ability to explode and leaves him as vulnerable as any ordinary human to physical assault.

Retrieved from "https://marvelcomicsfanon.fandom.com/wiki/Robert_Hunter_(Earth-1010)?oldid=255094"
Community content is available under CC-BY-SA unless otherwise noted.