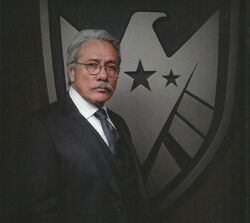 "I know Coulson; he was a good agent."

Robert Gonzales joined S.H.I.E.L.D. when he was young. When his wife died he left active duty, but eventually returned. Three years later, he became the Commander of the Iliad, a S.H.I.E.L.D. aircraft carrier. He eventually became one of the best commanders S.H.I.E.L.D. ever had.

Gonzales and Phil Coulson encountered each other a couple of times at the Triskelion; the two impressed each other with their dedication to S.H.I.E.L.D.

At the beginning of the S.H.I.E.L.D. Civil War, Gonzales was in command of the Iliad, which was carrying a dangerous cargo. A group of HYDRA agents attempted to assassinate him, but he killed them all, though he was heavily injured by a hit to the knee with an axe. He was found by a team of S.H.I.E.L.D. agents led by Bobbi Morse. After the team cared for his damaged leg, Morse revealed that she had been given a secret mission by Nick Fury to detonate all the weapons on the ship, ensuring HYDRA could never get their hands on the ship's cargo, despite the fact that she would undoubtedly be killed herself. Gonzales; however, refused to allow the team to waste time saving him, so he gave her new orders to allow him to join her so she could have as much help as possible to destroy the ship.

When they reached the command center, Agent Alphonso Mackenzie talked them into taking the ship back from HYDRA. Gonzales argued strongly against it, saying he was still the commander of the ship. However it was agreed that with S.H.I.E.L.D. now destroyed, it was time to take control and not allow innocent agents to drown. They fought back against the HYDRA agents and completed their mission successfully.

"Secrets are what brought S.H.I.E.L.D. down the first time, and we won't let that happen again."

After HYDRA was pushed back, Gonzales formed a new S.H.I.E.L.D. whose values opposed Nick Fury's about secrets and lies; he recruited Anne Weaver, Alphonso Mackenzie, Isabelle Hartley, Tomás Calderón and Oliver, among others, to his cause. When a new faction of S.H.I.E.L.D. was discovered, led by Phil Coulson, Gonzales did not trust Coulson's leadership, as he felt Coulson's ideas of running S.H.I.E.L.D. were too similar to Fury's. For the purpose of gathering intel, he dispatched Hartley and Mackenzie to join Coulson's S.H.I.E.L.D.

Mackenzie reported that Lance Hunter, a mercenary who had joined Coulson's team, had grown suspicious of him, so he had been captured and brought to meet Gonzales. As Hunter was a good friend of Mackenzie, the ex-husband of Morse, and had previously gone to great lengths in a failed attempt to save Hartley's life, Gonzales greeted him kindly.

Gonzales explained to Hunter the origins and mentality of his S.H.I.E.L.D.; he debated with him about the strength of Coulson's leadership. Gonzales reminded Hunter of how Coulson had seemingly gone insane due to the alien DNA now in his blood and how he was responsible for Isabelle Hartley's death due to his relentless search for the Obelisk, something which killed Agent Antoine Triplett and caused mutations for Raina and Agent Skye. While Hunter remained loyal to Coulson, he was able to agree with Gonzales about many of the risks involved with following Coulson.

Gonzales sent Mackenzie back to the Playground to continue his mission, retrieve Fury's Toolbox and gain Gonzales and his team entry into the base so Gonzales could finally confront Coulson.

Gonzales and his agents attacked the Playground, as Mack informed them that it was time to strike the base thanks to a hidden computer in the Playground used to contact the Iliad. Gonzales stormed through a hole blown in the side of the base and used his soldiers to capture Coulson's team. Once inside Gonzales found Alphonso Mackenzie, who had been injured in the explosion while trying to save Leo Fitz. Gonzales ensured Mackenzie got immediate medical attention.

Once the base was captured and all of Coulson's team were apprehended with the exception of Melinda May, Gonzales called for Coulson to be brought to him. In Coulson's office Gonzales greeted Coulson and they exchanged pleasantries for a short period. Coulson then revealed that he knew exactly who Gonzales was and his history with working for S.H.I.E.L.D., even revealing that he had intended for Gonzales to join his team. Gonzales explained his own knowledge of Coulson, expressing his concerns over Coulson's recovery with the help of alien blood and Skye's new powers. Gonzales revealed that he needed Coulson to show him how to open the Toolbox, but Coulson refused to help.

Gonzales expressed his hatred for the way Nick Fury ran S.H.I.E.L.D., reminding Coulson that Project Insight was Fury's idea, and how he had made Coulson his heir. Seeing Coulson would not cooperate, Gonzales handed the Toolbox over to a guard and ordered him to deliver it to Anne Weaver and Jemma Simmons. Before Gonzales could react, Melinda May stormed into the office and took over Gonzales' soldiers before shooting him with an I.C.E.R.. When he awoke he learned that May had helped Coulson escape before being captured herself.

After a team was sent to capture Skye, Gonzales questioned them about the events which had resulted in Tomas Calderon in critical condition after Skye lost control of her powers, moments before being rescued by a mysterious man. Gonzales argued that her powers had simply become too dangerous, proving his theories about dangers involved with Coulson's obsession with gathering people with powers, he began to suspect that Phil Coulson was making a team of powered people.

Gonzales personally approached Leo Fitz to ask him to open the Toolbox. Gonzales, accompanied by Bobbi Morse, offered Fitz and Jemma Simmons an introductory handshake as he relayed to them how he desired them to be his field agents, but Coulson recruited them first. Simmons told him that under different circumstances, they would be flattered; she wanted to know the repercussions if he refused. He explained that "Exit Protocols" were still in effect; if they did not want to cooperate, they could leave. Gonzales frowned as Fitz chose non-compliance and believed that their loyalty to Coulson over S.H.I.E.L.D. made them dangerous.

With Melinda May now captured and locked in Vault D, Gonzales began questioning her about Phil Coulson's history of leadership. Gonzales asked her if the reports were true that Nick Fury had ordered her to spy on Coulson due to him being injected with GH.325, and if it were true that Coulson had ordered her to kill him if he lost control of his mind. Gonzales also asked her if she was loyal to S.H.I.E.L.D. or to Coulson, she instead told him that they were one and the same. Gonzales reminded her of the dangers of powered people, citing Skye's recent attack on his men and May's own experiences in Bahrain. He tried to convince her to help them find Coulson before a deadly shootout occurred; May assured Gonzales that when he was ready, Coulson would find him.

The next day, Gonzales sent a team of agents back to the Retreat upon receiving a signal from there. Once they confirmed that Coulson was inside the cabin, Gonzales informed Morse, who suspected that Coulson had lured them there. Gonzales later learned that Coulson had allied himself with Hunter and Deathlok and had commandeered one of their Quinjets. This served to validate Gonzales' theory that Coulson was recruiting powered people and was concerned that once they found Skye, they would be headed for an explosive confrontation.

Seeing that he was making no progress with his questioning of Melinda May and with the vote of his council telling him to try another approach, Gonzales flew her to the Iliad and brought her into the boardroom. Once there, Gonzales drew a gun and explained it was his father's, who had used it during World War II. He gave it to her, telling her that she could kill him if she did believe he was a traitor to S.H.I.E.L.D. Gonzales told her that he was offering her a place on his board, claiming that his team would find Coulson and when they did, he would need May to defend him. May handed him back his gun, believing it to be empty; Gonzales then proved that it was in fact fully loaded the entire time.

Gonzales and Coulson later came to an understanding; Gonzales aided Coulson's team in infiltrating Hydra's Arctic base to rescue Enhanced prisoners in exchange for Coulson unlocking Nick Fury's Toolbox for him. Upon unlocking it, Coulson revealed that Fury was alive.

After the Avengers saved Sokovia, Coulson reorganized S.H.I.E.L.D. by having Gonzales' board accept him as director while remaining his advisers. Gonzales later became S.H.I.E.L.D. emissary to the Inhuman leader, Jiaying. Weaver provided him with his "insurance policy", which was a box containing a Chinese necklace, previously recovered from Daniel Whitehall's office, as a peace offering. However, Jiaying betrayed Gonzales, smashing a Terrigen crystal containing Diviner metal, unleashing the mist that slowly petrified Gonzales. He pulled a handgun from his jacket and attempted to use it, but couldn't. His last words were, "You'll start a war." Jiaying then took the gun from his hand and shot herself in the left shoulder twice, using it to the effect to make it look like S.H.I.E.L.D came for a fight.

Expert Tactician: Robert Gonzales planned and succeeded in conquering the Playground, causing Phil Coulson to flee. Coulson himself credited Gonzales for his brilliance.

Retrieved from "https://marvelcomicsfanon.fandom.com/wiki/Robert_Gonzales_(Earth-1010)?oldid=129744"
Community content is available under CC-BY-SA unless otherwise noted.