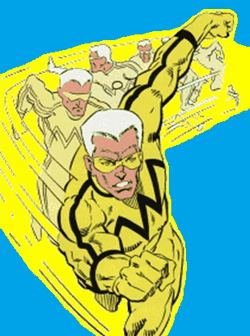 Married
Occupation
Adventurer
Origin
Origin
After being exposed to mongoose blood, Robert's latent mutant powers of super-speed kicked in, leading him to become the Whizzer.
Creators

His name was Robert Frank, and the world knew his name. But history knew him as the Whizzer. He moved faster than the rest of the world in every possible way. He believed that everyone deserved equal rights. He fought during World War II alongside other living legends. And when he found himself in this era, he ran to the first threat he saw, making him an Avenger. He was the first one of us to die in the line of duty. Most say it was chance that led him to be catapulted to the day the Avengers were born. I say it was destiny. His sacrifice gave us something to fight for. Robert Frank made us Avengers in the truest sense of the word.

Robert Frank was the son of noted scientist Emil Frank. His mother died in childbirth, leading his father to become reclusive, and devoted to his work. He intended to create a healing serum out of mongoose blood based on an old wives' tale that his partner loved. It was, in theory going to raise the dead. However, it was a failure, and he was mocked in the science community. Distraught, Emil took his now-reclusive son Robert on a safari.

While traveling abroad, Robert was nearly impaled by a rhino, and shortly thereafter bitten by a cobra. Apparently dying from his wound, his father took out the healing serum and spread it in the area of the wound. Robert faded into unconsciousness as the serum took effect. Thinking that his son had died, Emil died of fright. Robert returned to consciousness, the serum having altered his body, granting him the ability to think and move at superhuman speeds. However, he was to return to America, now an orphan. He would sneak out of the orphanage at night, fighting crime as the Whizzer, and gaining popularity.

The Whizzer spent most of his hero career helping to shut down prison riots and prevent mob hits. His large break, though, came when he shut down a Nazi ring where spies were slaughtering women. When he entered the hideout where they were being kept, one of the women ripped off her clothes to reveal the costume of another well-known vigilante: Miss America. The two managed to destroy the operation, and the two would frequently partner on future occasions.

When the original Liberty Legion was brainwashed by the Red Skull into serving the Axis power, Bucky set out to recruit new heroes to call themselves the Liberty Legion and free the originals. The Whizzer and Miss America were the first two approached. Immediately agreeing, they set out alongside Red Raven to stop the Human Torch and his sidekick Toro from destroying the Washington Monument. They managed to defeat Toro, but the Torch escaped. The Red Skull challenged the new Legion to fight the old, a challenge which was excepted. The new Legion fought the old brainwashed members until Bucky was able to destroy the device. Following this, the new recruits stayed in America while the originals took the fight back to the home front in Europe.

Robert more time fighting alongside the Liberty Legion in America, and during this period began courting (and later became engaged to) Miss America. After the war, though, the Cosmic Cube was displaced in time, and was obtained by the Red Skull. He attempted to alter reality so that the Nazis won World War II, but the Whizzer knocked the Cube from his hand. The jolt sent both the Skull and the Whizzer forward in time, leaving the other Legionnaires behind, thinking them both vaporized.

The Whizzer was sent forward in time to 1963 (in our time), during the battle against Graviton in New York City. Noticing that he was a serious threat, and he had several other costumed heroes lying at his feet. Robert ran and attacked Graviton, distracting him and giving the others their edge to resume the fight. Immediately recognized by Tony Stark, he was welcomed into the fight. After Thor landed a killing blow with his hammer, the group was celebrated by the media. Robert was one of them, and was heralded as a hero reborn, as an Avenger.

Robert moved into Avengers Mansion and was kept hidden from the public eye. It was well-known that Robert had a heart condition, and that too much stress could be lethal. Overwhelmed that twenty years of his life had just vanished, Robert fled the mansion, briefly encountering the costumed vigilante Spider-Man. Knowing who he was, Spidey convinced him to return to the Avengers before they ever knew he had left. The Wasp also crafted a new costume for him that proved to be a vast improvement over the original.

Robert soon found new excitement in fighting new threats, such as his former Avengers teammate Hulk and Liberty Legion teammate Namor. Against his knowledge, Captain America was thawed out from his frozen grave (his teammates hid this from him to protect his heart as well). However, the true test came when he fought Loki, God of Lies. Going to Asgard, he led the charge against Loki. However, noting who he was, Loki captured the Whizzer, stating that he was a man out of time and he didn't belong here. Claiming he was doing the Avengers a favor, he impaled Robert on his scepter. The last thing Robert saw was Captain America, having just arrived in Asgard, and his last word was "Steve..."

Hyper-Speed: Whizzer possessed the ability to move at superhuman rates of speed. In his prime the Whizzer could run at speeds nearing Mach I for several hours before fatigue impaired his performance. With middle age, however, the Whizzer's ability to move at superhuman speed was diminished considerably. Currently, he can run at speeds of up to 100 miles an hour for up to an hour before fatigue impaired his performance. The Whizzer's practical reaction time was about four times faster than an ordinary human being's when the Whizzer was in his prime, and the speed at which his brain processed information was heightened to a level commensurate with his bodily speed, enabling him to perceive his surroundings while traveling at high velocities.

Frank was quite skilled in unarmed combat due to his experience in the war.

Robert Frank suffered from a terrible heart condition that caused him to have a heart attack under circumstances of incredible stress. This nearly took his life once he came to the present day and when he fought the Hulk, and it was hypothesized by Dr. Donald Blake that if he was not careful, he would be killed by his actions, even if not by Loki.

Retrieved from "https://marvelcomicsfanon.fandom.com/wiki/Robert_Frank_(Earth-166)?oldid=156922"
Community content is available under CC-BY-SA unless otherwise noted.