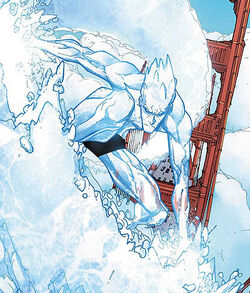 People think I'm a joke. I've heard them call me Snowball, Iceface, IcePrick. I'm a man of vastly untapped potential. And it's damn well beyond time I showed it.

Iceman's history is exactly the same as that of Earth-616's Robert Drake up until the Marvel NEW! relaunch.

Following the death of Professor X at the hands of Cyclops and his abandoning the X-Men, Iceman rejoined the team. He was once again stuck in his secondary ice form. But feeling a responsibility to restore Cyclops' wrongs, he began developing his powers further. He met his past self and future self during the All-New X-Men event and began dating Kate Pryde afterwards.

Retrieved from "https://marvelcomicsfanon.fandom.com/wiki/Robert_Drake_(Marvel_NEW!)?oldid=119467"
Community content is available under CC-BY-SA unless otherwise noted.