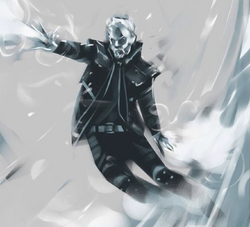 Okay, why doesn't everybody chill out? No, seriously. I did not do that on purpose.

Bobby Drake is a mutant with the ability to create and manipulate ice from moisture in the air. He was recruited into the X-Men as a teenager, and dropped out of High School to help Magneto fight against the forces of Apocalypse.

While serving with the X-Men, Bobby fell in love with his teammate, Northstar, who would eventually leave the X-Men to become Captain Canada and lead the Avengers. However, the two would maintain their relationship, despite not seeing each other for months at a time.

Retrieved from "https://marvelcomicsfanon.fandom.com/wiki/Robert_Drake_(Earth-9999)?oldid=245226"
Community content is available under CC-BY-SA unless otherwise noted.