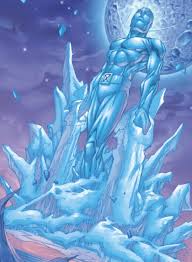 Brown
Unusual Features
Prior to X-Men, he had a permanent ice form.
Status
Citizenship

As his body temperature falls, the surrounding moisture in the air that is in contact with him is similarly lowered. Just as condensed moisture forms frost, this moisture forms an icy covering which encompasses his entire body. It also obscures his facial features. When Iceman first began to completely lower his body temperature, this covering took on a more snow-like appearance. But as he learned to increase the severity of his coldness, the covering assumed the consistency of crystalline ice that it has today. This ice constantly cracks with any movement of his body, and immediately reforms.(Hence, there is a cracking sound when Iceman, covered with ice, moves.) Through practice, Iceman has learned to control the intensity of his coldness, and he can selectively lower the temperature of isolated parts of his body.

Iceman's control of his powers are so vast that it extends to the molecular level, to the point that he can freeze all of the molecules of an object/being with a thought. An example would be freezing blood in the veins, thereby stopping flow to the brain. He has demonstrated the ability to control chemical reactions on the molecular level, at one point preventing Sunfire from accessing his powers.

Bobby is a Certified Practicing Accountant, a skilled ice skater, and can speak Spanish fluently.

While in human form Iceman possesses the normal human strength of a man of his age, height, and build who engages in moderate regular exercise. While in his ice form he is able to augment his strength. He is a fair hand to hand combatant.

Retrieved from "https://marvelcomicsfanon.fandom.com/wiki/Robert_Drake_(Earth-727)?oldid=225081"
Community content is available under CC-BY-SA unless otherwise noted.