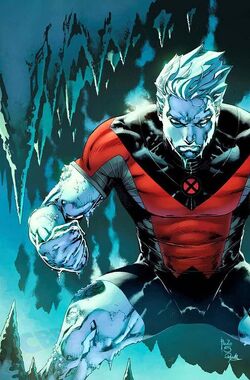 Okay... As the hottest guy in this mansion, I'm gonna tell you guys this once and once only... Chill the eff out...

Robert Louis "Bobby" Drake was born around the late 1980s in Long Island, New York to suburb couple Louis and Mary Drake. Bobby first discovered his mutant abilities at a young age when he found himself unable to stop feeling cold and shivering whilst standing in the middle of the summer heat. Believing he was sick at first, his parents tried to have him checked up in their neighborhood clinic only to find out that their son wasn't having a cold or any sickness; it was his own mind and body that was causing this phenomenon. News and rumors of Bobby's status as a mutant would spread as fear began envelop his mostly mutantphobic neighborhood, causing some of their friends and neighbors to despise him and his family simply due to finding out the fact that Bobby was "one of them freaks."

Worrying for Bobby's safety, his parents contacted the state-renowned mutant rights activist and pacifist, Professor Charles Xavier, after hearing him from their neighbor who surprisingly was supportive of Bobby's discovery. After answering the Drakes' contact through the Cerebro, Xavier granted their request to enroll Drake into his school before additionally assuring the couple that the family would find more peace and safety in Westchester County once they got the chance to move there, encouraging the entire Drakes to do so. On their way to leave their residence in Long Island, a group of mutantphobic gangsters tried to chase down and shoot the family, only for Drake to courageously use his powers once more in order to protect his parents from their attacks and bide them some time to escape.

Despite witnessing the truth, most their former neighbors still wallowed in fear due to his powers resurfacing in front of their eyes, still in denial by the reality that they were merely persecuting a young innocent child and his family for simply being who he is. Witnessing Bobby's act of heroism through the news, Xavier was astounded and impressed by his pure heart, knowing that he would be a perfect X-Man when the perfect time comes. By the time they arrived at Westchester, Bobby and his family were surprised to found out that Xavier has already bought a lot for them to move to, though because of this sudden act of generosity, his parents knew inside that they were not going to be seeing Bobby every single day by the end of summer, considering that they'd be sending him to Xavier's School for Gifted Youngsters by the start of classes.

By the start of high school classes, Bobby walked to the X-Mansion, where he hoped to learn and train to control his own ability in order to join the heroic X-Men. He befriended several mutants including Xavier himself and Professor Warren Worthington II, and several senior students including Scott Summers, Hank McCoy, Ororo Munroe, Lorna Dane, and Jean Grey, though he would also befriend students and trainees of the same age group as his, mostly people who would be his batchmates through the years, which included Warren Worthington III, Kurt Wagner, Rogue, Jubilee, Piotr "Peter" Rasputin, and Kitty Pride, whom the latter would find attraction with Bobby, who was still single and often flirty around most of his classmates, mostly who were female students who also found him attractive.

Bobby first joined the X-Men as its youngest member at the time, bearing the on the nose codename of Iceman during a confrontation against the mutant supremacist Brotherhood who tried to ravage an anti-mutant protest. After he and fellow X-Men managed used their powers outside training for the first time in order to save the the very protesters who hated their kind from the attacks of Magneto and his forces, Bobby had proven himself to be one of the most beloved and most essential member of the team, with Xavier and later even Logan assuring him that he would eventually be a powerful member once he get to be creative and resourceful around using it, both inside and outside their training grounds.

Being the nice and charismatic fella Bobby usually was since his first impression to his friends, he kindly accepted Kitty's request when she finally asked him out and even tried to make things work as they officially dated for a long while. While Bobby did find Kitty attractive and someone who was easy and trustworthy to open up to, he never felt any spark of physical attraction or intimacy especially on the night they tried to be each other's first time, in which Bobby had discovered that he was not as straight as he seemed to be. The moment Bobby realized that he might be gay, he opened up to Kitty, who although as slightly heartbroken that they're over, was nevertheless supportive that her first love gets to embrace who he really is, looking back from the perspective and experience of being a mutant. someone who is also mostly being persecuted.

The day after, the two broke off on good terms as friends, and while Kitty was secretly disheartened, she willingly did it so Bobby could be confident knowing that someone other than himself knows his secret. Throughout the years of training and learning in the X-Mansion and fighting crime outside it, Bobby would slowly yet surely take his steps to leave the closet by confiding to his other friends and mentors within the X-Men, who were mostly supportive for him, though some still painfully in denial were at the time, especially his close friend Nightcrawler, who tried to avoid and intrinsically resent him due to his religious beliefs. Fortunately not much later on, Bobby and Kurt would mend their friendship, accepting each other once again. Gaining more and more self-confidence and self-esteem about his sexuality, Bobby would later confess it to his parents on a day he came to visit them. Expecting them to be resentful due to their conservative background, the two actually revealed to be more welcoming and supportive for him. By their words, they already loved and accepted him for who he was as mutant. They rhetorically questioned him whether there's any difference on that with them accepting him for who he loves. The three passionately embraced afterwards.

When the mysterious and diabolical Movement Alliance conducted a series of massive terrorist attacks all over the world destroying several famous and sacred landmarks, killing over 1,500 people on the very first day of their worldwide assault. Consequently, all the Movement's opposing adversaries, the heroes, were united into creating their own Ultimate Alliance, in order to stop and prevent the Movement from commencing its schemes upon world domination and authoritarian rule, before its too late. For the first time in her, Bobby and his fellow teammates have never seen a conflict this atrocious and appalling and as they watch the ongoing news being reported across the world, especially after seeing his loved ones and people in danger.

The infamous and notorious villain of the X-Men known as Mister Sinister would intentionally led most of Magneto's loyalists into causing wreak and destruction on the city of Novi Grad, in Sokovia, without having any orders from Magneto, which immediately has gotten the attention of the X-Men, who went at the scene to figure out the situation. Little did the know, this strategy was one of the first known steps of Essex's plan as he would later unleash a larger event along with some the Earth's most powerful and villainous leaders, leading the Great Superhuman Movement. Setting their differences aside, Bobby and the rest of the X-Men sided forces with Magneto's Brotherhood as the core members plan how to take out and defeat Sinister's Brotherhood faction, one of the core factors in forming the Movement.

In the end of Sinister's short-lived reign, the villain was eventually founded by the mutant alliance (both Magneto's Brotherhood and the X-Men) once again in Genosha, after a dying Archangel threw a tracker on him without him noticing it, earlier during their battle. In the end, all of Sinister's clones were killed mostly by the overly-empowered Rogue, and he as well was finally defeated after he was defenseless after being surrounded by the X-Men and the Brotherhood, who used all their mightiest strength and powers against him that subsequently disintegrated the villain in the process, killing Mister Sinister and ending his tyranny in several countries all over the world and the Ultimate War itself once and for all. In the aftermath of Ultimate War, Bobby would find himself befriending and finding attraction in Jean-Paul Beaubier, a Canadian mutant whom he met at a bar in Westchester and took home at the X-Mansion to get closer with, not knowing that Jean-Paul was on a secret mission to infiltrate the mansion and keep track of a sinister entity that apparently wanders there.

Homo Superior Physiology: Bobby is an Omega Level Mutant. Iceman is a mutant with the ability to lower both his external and internal body temperature, which projects intense coldness from his body. Like any normal human being, the nerve centers for regulating Iceman's body temperature are found in the part of the brain called the hypothalamus. As his body temperature falls, the surrounding moisture in the air that is in contact with him is similarly lowered. Just as condensed moisture forms frost, moisture forms an icy covering which encompasses his entire body. Iceman can generate, manipulate, and fully control ice, snow, and cold temperatures. He can use his mutant ability to control moisture such as to freeze any air moisture into super-hard ice.

Retrieved from "https://marvelcomicsfanon.fandom.com/wiki/Robert_Drake_(Earth-61615)?oldid=268749"
Community content is available under CC-BY-SA unless otherwise noted.