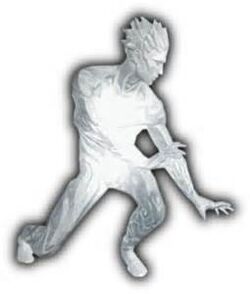 Little is known about Iceman's life before the Masters of Evil attack on the S.H.I.E.L.D. USS Alpha Helicarrier.

Bobby was one of the X-Men to join Nick Fury's task force against the Masters of Evil and voiced his disbelief that the Black Widow could be a traitor on the grounds that he thought she was "really hot" and did not want her to be one. After the threat of the Masters of Evil passed, he presumably returned to the X-Men.

Iceman was among the superheroes recruited by Fury in his Secret War against Latveria (then lead by Lucia von Bardas). When the Civil War broke out, Iceman and other X-Men joined became White Star members. He also became a participant in the fight against the Fold.

After a recovery team of the Ultimate Alliance is sent to the Hammer Industries facility in the NYC, they immediately find a call from what appears to be Valentin Shatalov. Bobby is sent to his location, and he explains that he intercepted a call from the main Skrull base on Earth and a Crimson Dynamo Skrull to check up on the progress of the Hammer Industries dreadnoughts. Iceman takes Shatolov to the scene of the crime. The Dynamo Skrull activates the completed Dreadnought (which manages to injures Iceman). Bobby is healed up back at the base.

After a 2-week time jump, the UA tracks down the weapon shipments organized by the Skrulls to the San Diego Zoo. Iceman, the Living Laser, fellow X-Man Storm, and the Crimson Dynamo arrive at midnight. Backed up by X-Man Cyclops, the five are met with strong resistance. The team are once again confronted by Venom, the symbiote having detected someone in the vicinity, but he is once again defeated. During that debacle, Eddie Brock observes the heroes leave at a safe distance. The squad discover a secret bunker under the zoo, created by the Skrulls. Plowing through security, they discover supervillain team, the Ani-Men, stealing data about the Skrulls. During the resulting battle, the Ani-Men are forced to retreat at the arrival of Sinister Six member: the Lizard; who sent as a reinforcement by his leader Doctor Octopus. The six superhumans make their way into a weapon creation lab, run by Skrullian assassin & scientist X'iv. Not ready for their arrival, he is forced to release mind-controlled supervillain Iguana upon them. While Iguana is defeated: X'iv manages to evacuate the lab, with the team pondering how the Ani-Men knew about the Secret Invasion. Back at the base, Stegron is waiting. The dinosaur man at first didn't want to be involved in the Secret Invasion; but changed his mind out of a desperate need of a cure.

The Alliance tracked down the Ani-Men to an abandoned area in Hell's Kitchen. A squad composed of Iceman, Cyclops, Spider-Man, and Lizard was sent to rendezvous with Luke Cage & Iron Fist. But upon arrival, they discovered that this is a supervillain hideout, and are subsequently ambushed by the Griffin. He was quickly defeated, but the team were confronted by the Shocker and Mister Fear, who are soon knocked out by Luke Cage & Iron Fist. The six storm the base, defeating along the way Tiger Shark, Armadillo, both Blackouts, Mentallo, the Purple Man, the Controller, the Wizard, and Madame Masque; until finally confronting the man coordinating the group, the Hood. It appeared that the Ani-Men, as well as the Wrecking Crew (who were imprisoned in the Vault before the breakout), have been convinced by the Hood into a supervillain crime syndicate. The Hood is defeated, but it's soon revealed that another member of the gang, the Slug, had already been replaced by a Skrull, having been trained with strong mental blocks to protect his mind from mental detection by the Hood. The Skrull tried to contact help, but was discovered by the Hood and killed. In the confusion, Hood managed to teleport him and the gang out of the base.

Bobby is a certified practicing accountant, a skilled ice skater, and can speak Spanish fluently.

Retrieved from "https://marvelcomicsfanon.fandom.com/wiki/Robert_Drake_(Earth-6109.2)?oldid=159040"
Community content is available under CC-BY-SA unless otherwise noted.