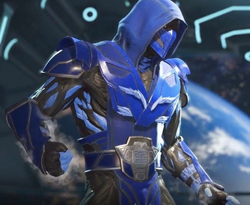 Earth-400
Base Of Operations
The Nexus
Characteristics
Gender

My heart froze over long ago.

Bobby Drake developed his mutant abilities to manipulate moisture into solid ice forms at the age of 16. He already had a rocky relationship with his parents after he came out as gay, but when they discovered his mutant abilities, he was kicked out of the house. However, it wasn't long before he was approached by a man named Charles Xavier, who offered him a home in his Westchester estate.

Despite his initial reaction being creeped out, after he had it explained to him that it was a safe haven for mutants, he excitedly accepted. While there, he became great friends with his fellow mutants, Cyclops, Phoenix, Beast, Shadowcat, Storm, and Wolverine. Bobby eventually took on the name Iceman, and became a popular superhero after the X-Men made their public debut as a team.

Unfortunately, the X-Men quickly became the target of several anti-mutant hate groups. One such group, the Purifiers, used AIM technology to brainwash Professor X into using his psychic powers to eradicate the X-Men. While the initial attack took the lives of Cyclops, Storm, Beast, and Shadowcat, Phoenix stepped up to fight off Xavier. Wolverine then took Bobby and ran as far away as possible, only later discovering that Phoenix lost her life putting Xavier into a catatonic state.

Heartbroken and traumatized, Bobby had no idea where to go from there. Wolverine promised Bobby that he would be there to help him find his way. Eventually, Wolverine was approached by Elektra, one of his old partners from his days as an assassin. She offered to help them get vengeance on the Purifiers, but Wolverine refused to go down that road again. Bobby, however, wanted the chance to avenge his fallen friends. Wolverine warned him that he was about to go down a dangerous road, but he didn't care.

Bobby went with Elektra and was taken to the Hand's stronghold in Tibet. For the next several years, he trained alongside Elektra and some of the world's deadliest assassins to use his powers in deadly ways he never would have been able to think of. He was quite fond of manifesting ice swords, but also discovered he was capable of manipulating a person's body moisture and freeze them from the inside. After he had made his first kill, Bobby felt transformed, and adopted the new name Sub-Zero.

From there, he went on a killing spree against the Purifiers. He took no pleasure from their deaths, but knew that what he was doing was necessary for the good of all mutants. However, he eventually found himself opposed by Wolverine, who explains to Bobby that he is disappointed in the person he's become. Sub-Zero tried to explain, but Wolverine wouldn't listen. They engaged in battle, and Bobby held his own for much longer than Wolverine expected.

Eventually, Bobby believed he had claimed victory after freezing Wolverine solid. But it was then that he discovered Wolverine had called in back-up in the form of the Avengers. Bobby knew there was no way he could take down the combined might of Iron Man, Captain Marvel, and the Human Torch. He attempted to make his escape, but was caught in the blast fired at him by the Human Torch, and believed he would finally be reunited with the only people he ever considered family.

But Bobby did not die. Instead, he woke up in a place outside of the Multiverse called the Nexus. It was there that it was explained to him by a being called the Silver Sentry, that he had been plucked from his reality to become a member of Team X and try to fix the damage from across the multiverse.

For the first time in years, Bobby felt his heart melt at the sight of his old friends, Scott and Jean, and was taken aback to discover that the blue hairy monster was an alternate version of Beast, even more so when he learned Apocalypse housed the consciousness of Charles Xavier. He agreed to go along with Team X's mission, but was hesitant about possibly completing his mission. Truthfully, he had no desire to return to his home reality.

The more missions he went on with Team X, the more he felt like he was rediscovering a sense of family. Despite intimidating his teammates at first, he was able to open up to them and form genuine connections, especially with Cyclops, who had lost his reality's version of Bobby. He came to care for them so much, that he was willing to make the ultimate sacrifice for them. Eventually, the Team found themselves in a reality where the Hand was being led by Psylocke, who had partnered with Magneto to wipe out the majority of humanity with a gene bomb. While Team X was sent to stop Magneto from wiping out the Avengers, Sub-Zero stayed behind to fight off Psylocke in an attempt to stop the bomb from going off.

After a long and bloody battle, Bobby was able to impale Psylocke with an ice blade, and expand it to rest of her intestines. With less than a minute to defuse the bomb, Bobby discovered that its radius could be directed to one living specimen, he poured a sample of his own blood onto the scanner and took a deep breath, picturing the X-Men during his last moments.

Retrieved from "https://marvelcomicsfanon.fandom.com/wiki/Robert_Drake_(Earth-400)?oldid=252401"
Community content is available under CC-BY-SA unless otherwise noted.