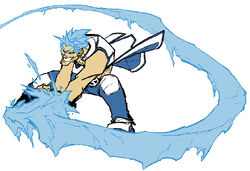 I'm cool as ice, baby, that's why I love being me.

Bobby Drake was born in the heart of a Colorado family who always lived in the coldest conditions. Bobby always loved the snow, which pushed him further into chasing his goal of becoming a sports athlete, focusing on snowboarding.

During his late teens and adult years, he honed his skills as a snowboarder winning competition after competition with perfect and uncanny ability to score the hardest of tricks yet molding himself with the snow. Most of his friends and fellow competitors believed that Bobby was "becoming one with the Ice and Snow" effectively giving him the nickname of "Iceman" amongst his peers.

During an appearance at the Winter X-Games, held in his hometown of Aspen, Colorado, Bobby went into an overdrive mode jumping from the "Widowmaker", one of the most dangerous mountains for a snowboarder to handle, but for Bobby it was an easy challenge. However, the adrenaline rush made Bobby's body to transform into solid Ice, truly becoming one with the snow and ice, even pulling some tricks never seen before thanks to his powers. Once he crossed the finish line, Iceman was a little upset that everyone was silent and not celebrating, until he saw himself in the giant screen mounted at the area, seeing himself as solid ice. He mentally manages to regain his human look and goes back to his cabin, trying to shake the situation off his head and just enjoy the rest of the competition.

Once Bobby's power display went public, he got disqualified from the X-Games and expunged from all his medals, including his past years medals, assuming that he used his powers all this time and kept them hidden, something Bobby has firmly denied. This also damaged his image outside the sports industry, losing all the sponsors he had and all the contracts he earned. Fuming about this situation, he bursts into full ice-form damaging his cabin, which attracted the attention of other athletes who were angry at him for "damaging the snowboarding industry".

After a series of incidents, Bobby moves his family to Canada, choosing to stay and give one last shot to fix his already damaged image, that is until he is intercepted by a group form by, according to him, "a dude with red sunglasses, a hot redhead rocker chick, one giant blue dog and a bald dude," who wanted to talk to him. He acted hostile towards them, except to Jean who was being flirted by him, but she felt a little bit repelled by his remarks. Xavier convinces to let him hear them out and Henry explains that Bobby is a mutant, just like them. Xavier invites Bobby to join their group but Bobby replies that he'll only accept if they fix his image on the snowboarding community. Xavier agrees, although says that he can't guarantee anything.

As his body temperature falls, the surrounding moisture in the air that is in contact with him is similarly lowered. Just as condensed moisture forms frost, this moisture forms an icy covering which encompasses his entire body. It also obscures his facial features. When Iceman first began to completely lower his body temperature, this covering took on a more snow-like appearance. But as he learned to increase the severity of his coldness, the covering assumed the consistency of crystalline ice that it has today. This ice constantly cracks with any movement of his body, and immediately reforms. (Hence, there is a cracking sound when Iceman, covered with ice, moves.) Through practice, Iceman has learned to control the intensity of his coldness, and he can selectively lower the temperature of isolated parts of his body.

Iceman's control of his powers are so vast that it extends to the molecular level, to the point that he can freeze all of the molecules of an object/being with a thought. An example would be freezing blood in the veins, thereby stopping flow to the brain.

Iceman is a skilled professional snowboarder, enabling him to use his "Power Slide" to perform major feats and stunts to incorporate them in his fighting skills.

Retrieved from "https://marvelcomicsfanon.fandom.com/wiki/Robert_Drake_(Earth-120986)?oldid=52734"
Community content is available under CC-BY-SA unless otherwise noted.